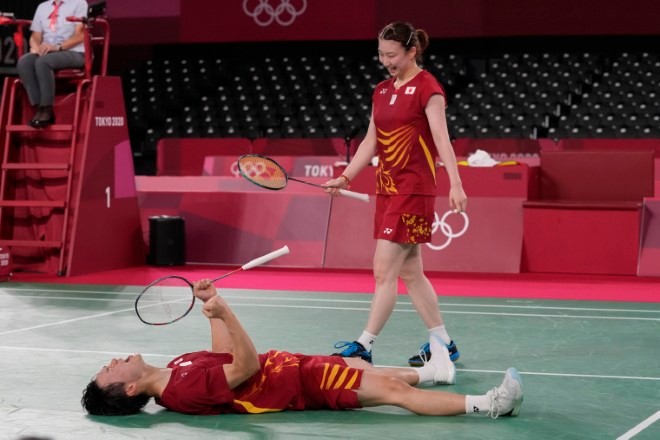 Japan won its first-ever mixed-doubles bronze medal on Friday when Yuta Watanabe and Arisa Higashino, who have played together for a decade, took out Hong Kong’s Tang Chun Man and Tse Ying Suet 21-17 23-21 in a tight match.

Exhausted, the Japanese shuttlers both said there were times they wanted to throw in the towel.

“It was really difficult to enjoy because there was so much pressure,” Higashino said.

Watanabe, the only Japanese man to win an Olympic medal in badminton, said he hopes others win more and that he is honored have been the first.

“Of course I wanted to get gold, but I’m still satisfied,” he said.

The fact that there are two Chinese top medal contenders may foreshadow what is to come--the country has had an unbroken string of victories at the Tokyo Games so far.

Women’s singles number three Nozomi Okuhara from Japan did not fare as well as her compatriots in a gripping three-game match with world number nine He Bing Jiao of China.

The first two matches ended at an even 13-21 21-13 but He came back with a vengeance and brought fleet-footed Okuhara to her knees several times during the deciding third match that ended 21-14.

“Being patient is the only way you can win in the game,” Chen said. Because they both won, Chen next plays her teammate He.

“It doesn’t matter now who wins the game tomorrow as long as we do our best,” she said.