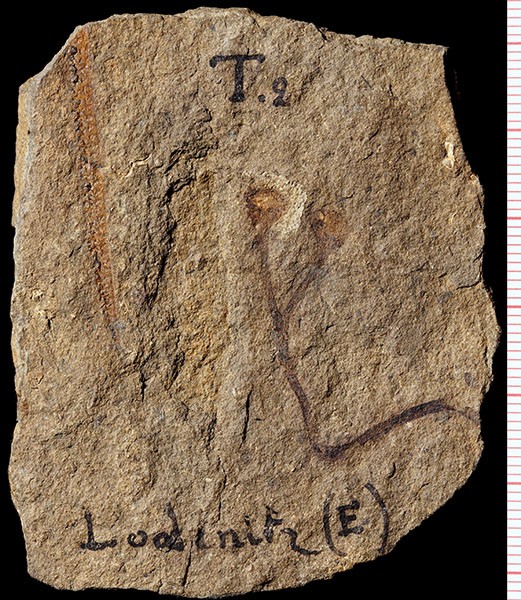 The Cooksonia barrandei fossil (Provided by the Czech National Museum)

The earliest known fossil of a terrestrial plant that shows almost its entire structure has gone on display for the first time in the world at an exhibition in Tokyo.

Although it was discovered in the 19th century, the fossil was mistaken for alga remains and kept in a storage box for more than 100 years out of the public eye.

The specimen, a variety called Cooksonia barrandei, flourished 432 million years ago. It is being shown at the National Museum of Nature and Science in the capital’s Ueno district through Sept. 20 as part of the “Plants: Mainstays of the Planet” exhibition.

“The fossil is extremely significant because it serves as a fiducial sample to identify the species,” said Atsushi Yabe, 50, the museum's chief researcher. “It is a good example that shows the plant’s simple structure with no roots or leaves.”

Unearthed from stratum from the Silurian Period near Prague, the fossil is comprised of a furcate stem with a trumpet-shaped spore case at its end. Since it has no leaves, the species is believed to have photosynthesized with its stem surface.

The plant is thought to have grown in wetlands around river mouths. The fossilized stem is 6 centimeters long. Its total length is estimated to have been about 10 cm.

When the fossil’s container stored at the Czech National Museum was examined for repacking in 2011, it turned out to be “the world's oldest fossilized large land plant.”

An academic paper on the rediscovery was published in the British scientific journal Nature in 2018.

Land plant species are said to have emerged 470 million years ago, but no fossils showing the entire structure of the plants had been unearthed from stratum of that period.

An exhibition scheduled in Prague was postponed due to the novel coronavirus pandemic, allowing the one planned in Tokyo to become the first in the world to display the fossil.