Partition with dragon drawing depicted in film ‘Belle’ on display 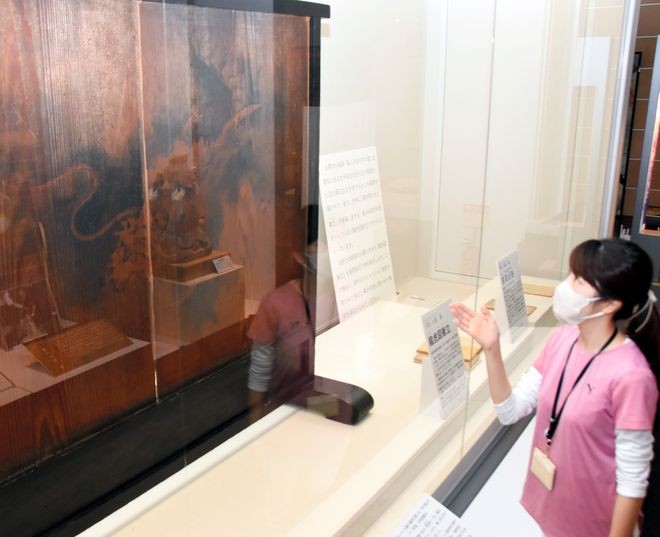 Curator Nozumi Nasu explains about the "Ryukozu Tsuitate" partition on display at the Kochi Prefectural Museum of History in Nangoku, Kochi Prefecture, on July 15. (Hiromu Imabayashi)

NANGOKU, Kochi Prefecture--A traditional "tsuitate" partition adorned with an illustration of a dragon, which is featured in Mamoru Hosoda's animated film "Belle," is being displayed at the Kochi Prefectural Museum of History here.

"Belle," which was released nationwide on July 16 in Japan, was recently screened as part of the Cannes International Film Festival's new Cannes Premieres section.

The film centers around a high school girl living in Kochi Prefecture who meets a mysterious creature called the Dragon in a virtual world on the internet.

The wooden partition, titled "Ryukozu Tsuitate" (Partition with drawings of a dragon and a tiger) is 114.3 centimeters by 165 cm. The illustration, drawn by Shoryo Kawada (1824-1898) in ink on one side of a cedar board, shows the dragon sticking its head out from between black clouds. A tiger is illustrated on the other side.

Kawada, based in the Tosa Domain (present-day Kochi Prefecture), was active from the late Edo Period (1603-1867) to the Meiji Era (1868-1912). The painter is renowned for interviewing John Manjiro, the first Japanese known to have lived in the United States, to compile his experiences into a book.

The anime studio responsible for the film filed an application to borrow visual data about the partition last fall, according to the museum.

It had been kept at Kokuseiji temple in Kochi before being found by curator Nozomi Nasu, 34, in 2017, who was visiting temples in the prefecture to find exhibits for a special exhibition themed on Zen.

"When I saw it for the first time, it stirred up my imagination although it almost only shows the dragon's head with sharp eyes and a long beard, and it deeply impressed me," Nasu said. "I'm happy that this lesser-known work is seeing the light of day."

The artifact has been entrusted to the museum, which has shown it to the public on two previous occasions.

The museum is displaying the partition until Sept. 13. For inquiries, visit the museum's official website at (https://www.kochi-bunkazaidan.or.jp/~rekimin/index-e.html).