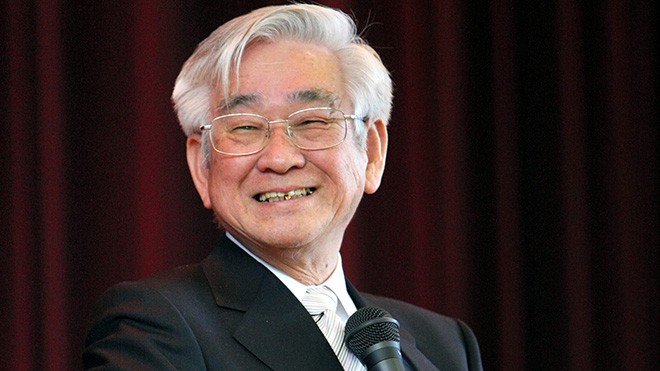 Toshihide Maskawa, a dedicated peace advocate who won the 2008 Nobel Prize in Physics for his theoretical research on elementary particles, died on July 23. He was 81.

The work led the two to share the Nobel Prize in Physics in 2008 with Yoichiro Nambu, a professor emeritus at the University of Chicago, who died in 2015 at the age of 94.

Maskawa and Kobayashi came up with the theory to explain the occurrence of a phenomenon known as CP violation, which describes the situation in which there is an absence of true symmetry between particles and antiparticles during some cases of decay.

The two theorized that at least six types of quarks would be required for a CP violation to occur. At that time, only three types of quarks had been confirmed. But the three other types of quarks were later discovered: two were found in the 1970s and the other in the 1990s. Experiments showed the existence of the six types.

Maskawa, who survived U.S. air raids on his hometown Nagoya in 1945 when he was a child, was an opponent of war.

He helped found the Scientist Society of Article 9, a group of scientists supporting the war-renouncing Article 9 of the Constitution, and also criticized many recent university military research projects for receiving funding from the Defense Ministry or the U.S. military.

Maskawa, in his speech at the Nobel Prize awards ceremony, touched on his experiences during World War II, calling it a “reckless and tragic” war.

Some expressed concern over his choice to speak about war on such an occasion, but Maskawa reportedly insisted on sticking with his originally prepared speech, saying he was the “last generation” that could share its experience of war.

“He had a strong interest in not only his specialty of physics but also the entire Japanese society,” said Michiji Konuma, a professor emeritus of physics at Keio University, and a friend of Maskawa.

“He used to say senior scientists, who know history, need to have more connections with young researchers to stop Japan’s recent move to promote military research. I wanted him to exert greater influence on that effort, so I’m really saddened by his death.”