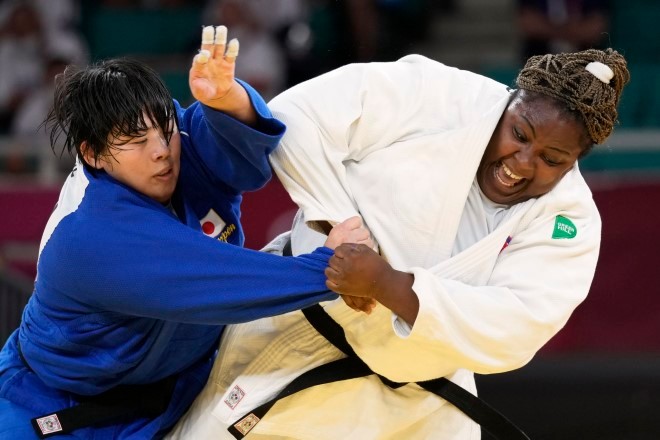 Akira Sone of Japan, left, and Idalys Ortiz of Cuba compete during their women’s +78kg gold medal judo match at the 2020 Summer Olympics on July 30 in Tokyo, (AP Photo)

The 21-year-old Sone, the world champion who was making her Olympic debut in the heaviest category for women, fought courageously against Ortiz, whose silver is her fourth Olympic medal.

She finally won in anticlimactic fashion when Ortiz was penalized for the third time for a false attack after taking two earlier penalties for non-combativity.

“I competed today thinking I must follow other Japanese judokas who went on a medal rush from the day one in the Games,” Sone told reporters.

The nine gold medals in judo surpassed the previous record of eight at the 2004 Athens Games. Japan has won 11 medals in the first 13 weight classes at the Tokyo Games.

Sone defeated Iryna Kindzerska of Azerbaijan in the semi-finals and Turkey’s Kayra Sayit in the quarters.

Kindzerska and France’s Romane Dicko won bronze for their first Olympic medals. The 21-year-old Dicko cut a striking figure on the tatami by dyeing her braids red, white and blue like the French flag.