VOX POPULI: The tricky matter of national anthems at the Olympics 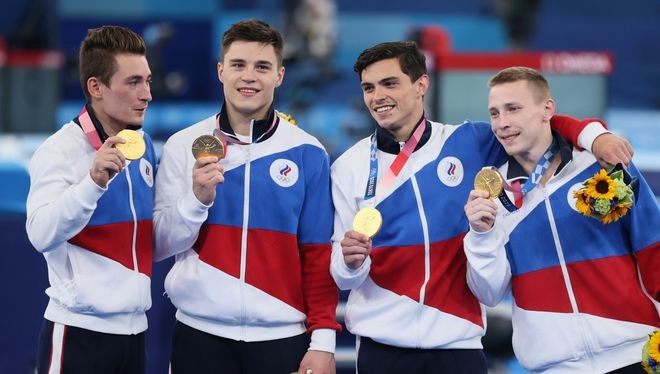 Russian Olympic Committee's gymnasts during a ceremony after they won gold medals in the men's team gymnastics competition at the 2020 Summer Olympics in Tokyo on July 26. (The Asahi Shimbun)

"A mighty will, a great glory" is a line from the Russian national anthem, the melody of which has become familiar to the world through international sports competitions.

But it is not being heard at the Tokyo Olympics.

Tchaikovsky's Piano Concerto No. 1 was played instead when Russia won a gold medal in a come-from-behind victory over Japan in the men's gymnastics team competition event on July 26.

"I was disappointed not to hear our national anthem," lamented a Russian athlete.

Banned from the Tokyo Olympics due to its state-sponsored doping program, Russia was allowed to participate only as "the Russian Olympic Committee," and without the Russian national anthem.

As its replacement, Russia proposed the folk song "Katyusha," but this was rejected by the Court of Arbitration for Sports.

According to a colleague with a long stint as a Moscow correspondent, the song expresses the feelings of a young girl whose lover has gone to war. The lyrics go to the effect, "Let him defend our Fatherland, and Katyusha will remain true to her love."

The court was apparently troubled by the song's strongly patriotic nature, and decided to play it safe with the Tchaikovsky concerto for its timeless appeal.

The Olympic Charter has no provisions with regard to the playing of national anthems during the awards ceremony.

Avery Bundage (1887-1975), who from 1952 presided over the International Olympic Committee for 20 years, advocated the removal of national anthems. A zealous advocate of amateurism, he sought to remain true to the Olympic ideal of keeping politics out of the Games.

But in reality, politics always cast shadows over the Olympics.

When a Hong Kong athlete won a gold medal earlier this week and the Chinese national anthem was played, Hong Kong residents booed in protest. They probably wanted to hear the song of young dissidents that goes to the effect, "Let us establish a free and glorious Hong Kong."

The Olympic summit is reached only after constant rigorous training and persevering under tremendous pressure. But the tune that is supposed to extol the triumph disturbs the victor deeply.

The Olympics leave me brooding over many things.