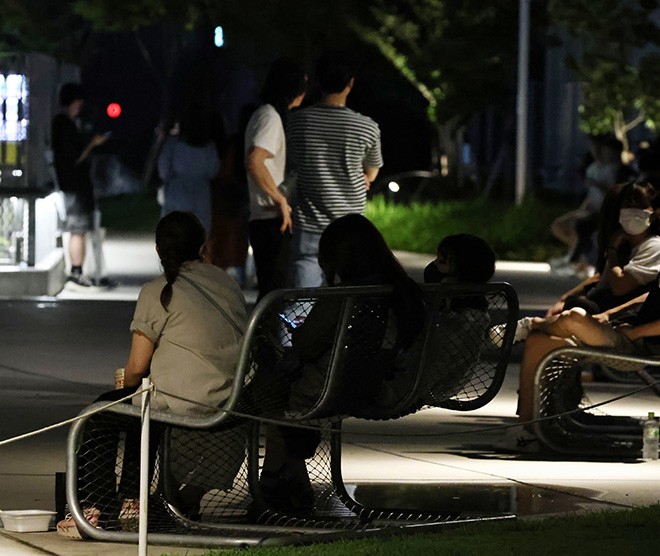 Young people gather to chat and drink after dark at Miyashita Park in Tokyo’s Shibuya Ward on July 30. (Tatsuya Shimada)

Millions of people in Tokyo are staying home glued to their TVs to watch the Olympics, but plenty of others are partying away in parks each night, swigging cans of booze as they cheer the latest medal tallies by Japanese athletes.

This is the reality of the expanded state of emergency declared by the government as COVID-19 cases continue to skyrocket.

Prime Minister Yoshihide Suga insists that his unpopular decision to go ahead with the Olympics at the height of the pandemic has nothing to do with the surge in new infections. Rather, the Games are helping to contain the health crisis, Suga and his aides contend.

Yasutoshi Nishimura, the state minister heading the government's efforts to grapple with the health crisis, stated, “We face an extremely tough situation as infections are spreading widely” while addressing a Lower House committee meeting July 30 on the latest COVID-19 surge.

The number of new cases nationwide hit a record 10,743 that day.

But in the same breath, Nishimura said, “As many people watch the Olympics at home, the movement of people has slowed down since July 20.”

He also noted that TV ratings for Olympic-related programs “remain high, which is an indication that many people are staying home and watching the Games.”

Suga held a news conference that evening to announce that the emergency curbs are being extended until the end of August and expanded to cover the four prefectures of Chiba, Saitama, Kanagawa and Osaka.

He reiterated that his government is doing everything it can to bring the crisis under control while the Olympics are being staged. He mentioned efforts to regulate traffic and exhortations to companies to allow employees to telework as much as possible. Suga said these efforts are in fact paying off in terms of reducing the number of people going out in nightlife districts in Tokyo.

But in reality, parks in central Tokyo are packed every night with youngsters and others holding “Olympics watch parties” with friends while downing cans of alcohol purchased at convenience stores.

Bars and restaurants around trendy JR Harajuku Station in the capital's Shibuya Ward have been complying with metropolitan government requests since emergency curbs were re-imposed July 12 to turn off their lights at 8 p.m. Spacious Yoyogi Park is nearby, and it immediately became a magnet for people to gather after dark with plastic bags packed with food, snacks and drinks purchased at convenience stores.

The park initially was intended to be one of the capital's official public viewing sites for the Tokyo Olympics. But that idea was scrapped in early June due to the pandemic.

On the evening of July 30, when Japan’s gold medal count hit an all-time Olympic record of 17, hordes of young people occupied spaces in the popular park.

Signs erected all over the park say, “Please refrain from drinking alcohol.”

Loads of youngsters paid no attention, many sitting right next to the signs, chatting, drinking and laughing away.

A man in his 20s came to the park with a friend from his university days to drink. He said he was well aware of the spike in COVID-19 cases but it did not matter because “the park is well ventilated.”

The IT company he works for maintains a teleworking policy for its employees. As a result, the man said he had not been to a drinking party for more than a year.

This occasion was extra special because it was the first time for the two friends to “have drinks together face to face.” So special that he purchased sushi to share that cost 10,000 yen ($91).

In another corner at the park, a 30-year-old woman downed wine with three coworkers.

They sat on a tarp as one of them held up a smartphone to watch Olympic events together.

“We wanted to get a feel of a public viewing party,” the woman said.

Still, it was rather a subdued one.

“I really wish we could do whoops and high-fives,” she lamented.

Another “watch party” was going on at Miyashita Park near JR Shibuya Station the same evening.

By 9:20 p.m., approximately 350 people had packed the park, which is situated on the rooftop of a commercial facility.

All of the benches set up in the park were occupied.

Young women were busy talking about their latest romances. Non-Japanese sat in a circle and partied away.

Many of the participants that evening did not bother to wear masks.

Two university students, aged 20 and 21, arrived at the park after a meal at an “izakaya” restaurant.

They sat on the ground and watched an Olympic fencing event on a smartphone.

When the Japanese team won a gold medal, they screamed, “A medal!!

On streets near the park, young skateboarders were honing their skills.

A 21-year-old man, holding his board, said the Olympics “are hot!”

“He is on a way different level!” the man said in awe.

(This article was written by Yuji Masuyama, Yuko Kawasaki and Hidemasa Yoshizawa.)