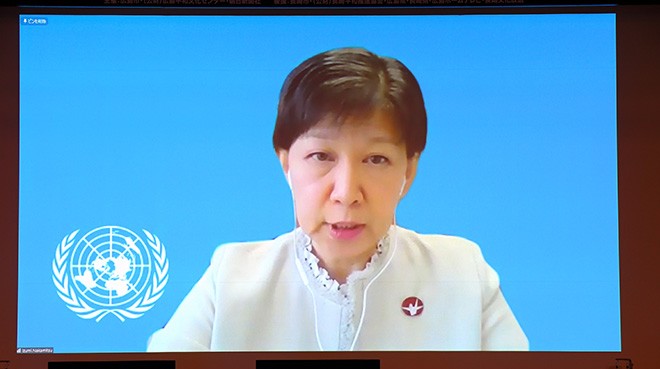 The Treaty on the Prohibition of Nuclear Weapons (TPNW) that took effect in January was the central theme of an international conference held online from Hiroshima on July 31.

Issues discussed included how the treaty would contribute toward nuclear disarmament as well as the role Japan should play within the pact that it has not yet ratified.

The International Symposium for Peace 2021: The Road to Nuclear Weapons Abolition was sponsored by the Hiroshima city government, the Hiroshima Peace Culture Foundation and The Asahi Shimbun. The theme for this year’s event was “A new world illuminated by ‘treaty of hope.’”

The TPNW was approved at a U.N. conference in 2017 and went into effect after 50 nations ratified it. The nuclear powers, along with U.S. allies such as Japan that are protected by the U.S. nuclear umbrella for defense purposes, have not.

The keynote address was given by Izumi Nakamitsu, the U.N. High Representative for Disarmament Affairs, who took part online from U.N. offices in Tokyo because of self-isolation protocol regarding the novel coronavirus pandemic.

While noting that the contentious global environment had placed “nuclear risk at its highest level over the past 40 years,” she said there were rays of hope, including the five-year extension of the New START (Strategic Arms Reduction Treaty) between the United States and Russia, as well as moves starting this week between those two nations for a new agreement.

Nakamitsu emphasized that the TPNW should be considered as an additional measure to advance nuclear disarmament along with the Nuclear Nonproliferation Treaty (NPT).

Nations that ratified the TPNW have continued to take a vastly different stance from the nuclear powers and their allies, she noted.

“I hope the two sides will not use their positions to interfere with negotiations for nuclear disarmament under the NPT,” she said.

An NPT review conference is scheduled to be held in January after a number of postponements due to the COVID-19 pandemic.

“A new vision is needed to take into consideration the geopolitical reality in which the former bipolar nuclear structure has been replaced by one with more nations possessing nuclear weapons,” Nakamitsu said.

But she urged against any move to do away with existing treaties and stressed the importance of using the foundation established by treaties, such as the NPT, to make further efforts toward nuclear disarmament.

She said the importance of the TPNW will in large part be determined by how it is connected into the existing framework for nuclear disarmament under the NPT and other agreements.

The participants in the panel discussion also touched upon the fragmentation between TPNW ratifying nations and the nuclear powers.

Rose E. Gottemoeller, undersecretary of state for arms control and international security during the Obama administration, said, “I have been perturbed” by the wide gap between the two sides.

She spoke about the long history of negotiations between the United States and Russia on nuclear weapons, including the recent start of new talks despite the fact relations between the two nations are “at rock bottom.”

Gottemoeller also touched upon the importance of bringing China into discussions, given that it has increased its nuclear warhead arsenal even as the United States and Russia have made cuts.

“We need to keep a sharp eye on the Chinese buildup and get China talking about their strategy and intent,” she said.

She suggested that a "hotline" be extended to China, given the tradition of mutual communications between the United States and Russia.

“While we may not be able to become friends, we can serve as partners (with Russia and China),” she said.

Hiroshi Nakanishi, a professor of international politics at Kyoto University, referred to negative aspects of the TPNW regarding its effect on nuclear disarmament. He said the fragmentation of the two sides essentially boiled down to arguments about the inhumane nature of nuclear weapons presented by nations pushing for the treaty based primarily on ethical reasons.

“The treaty intensified the differences between the two sides,” Nakanishi said.

He also warned that if the TPNW was not managed in an effective manner, there was a real danger of cynicism arising about ethical concerns regarding nuclear weapons if the treaty cannot be carried out as a legal instrument against the nuclear powers.

“What should be avoided is an even greater gap between those who still argue for the importance of nuclear deterrence and those who call for the abolition of nuclear weapons,” he said.

The fourth member of the panel, Natsuki Yasuda, a photojournalist who is deputy head of the nonprofit organization Dialogue for People, displayed photos she took in war-torn Iraq and Syria, including one of a street in Iraq named after Hiroshima.

She showed a number of photos of Halabja, northern Iraq, where an estimated 5,000 Kurds were killed in what has been called the “anfal” genocide due to the use of chemical weapons by the Iraqi government under President Saddam Hussein in 1988 during the waning days of the Iran-Iraq war.

Yasuda compared the victims of that genocide with survivors of the atomic bombings of Hiroshima and Nagasaki because many Iraqis suffered the same sort of discrimination as many hibakusha when it came to marriage and other matters due to exposure to radiation.

Another key topic of discussion was the conference of parties to the TPNW that is also expected to be held early next year and the role Japan should play.

There was a major difference in opinion over whether Japan should take part with observer status since it has not yet ratified the treaty.

Nakamitsu said she did not think there would be any negative fallout for Japan if it decided to take part as an observer.

“Having Japan expressing its views as an observer would provide it with an opportunity to communicate to the world how it wants the treaty to be managed,” she said.

But both Gottemoeller and Nakanishi expressed opposition to having Japan attend even as an observer.

“In my personal view, attending in an observer status would not send the right signal and could become a source of disagreement among U.S. allies in Asia and NATO,” Gottemoeller said.

Nakanishi said it would be difficult for Japan to take part in the first conference even as an observer because of the wide fragmentation between the two sides.

“The government should express its views about how difficult the issue is and promote domestic discussion of the issue before deciding whether to join as an observer,” he added.

Nakanishi said his focus for the TPNW parties conference will be “whether the nations that ratified the TPNW continue to use it to denounce the nuclear powers or use the treaty to reinforce the NPT process.”

Gottemoeller called for greater efforts between the two sides to try to ensure that the TPNW does not undermine the NPT process.

“We need to develop a good discourse, but that can be done in a number of ways” outside of the TPNW parties conference, she added.

Rather than the two sides fighting, Gottemoeller said they should be pushing together “the NPT and TPNW to move the nuclear disarmament process forward.”

Yasuda said she felt it was important for Japan to participate as an observer if only to get a direct feel for what views were being raised by other nations.