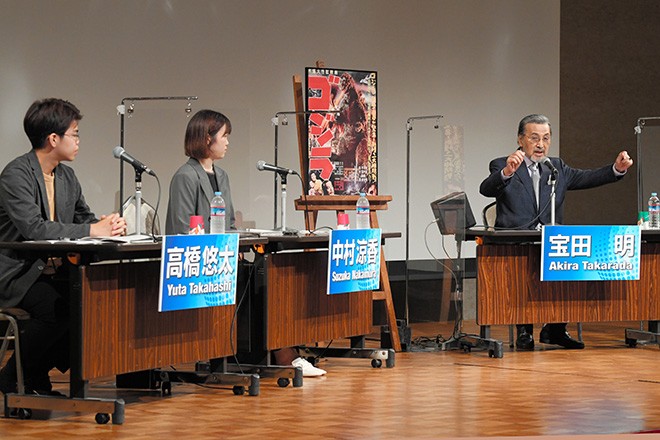 Akira Takarada, far right, takes part in a special talk session of the International Symposium for Peace 2021: The Road to Nuclear Weapons Abolition along with, from left, Yuta Takahashi and Suzuka Nakamura. (Mihoko Takizawa)

Actor Akira Takarada, who played the lead role in the first “Godzilla” movie, talked about the global phenomenon that resulted as well as his own war experiences as a Japanese child living in Manchuria during a special talk session of the International Symposium for Peace 2021: The Road to Nuclear Weapons Abolition.

Takarada, 87, was joined in the session by two university students campaigning to spread awareness about the Treaty on the Prohibition of Nuclear Weapons (TPNW).

Yuta Takahashi, a junior at Keio University in Tokyo, and Suzuka Nakamura, also a junior at Sophia University in Tokyo, are involved in a campaign to survey Diet members about their views on the TPNW. Hiroshima native Takahashi and Nakamura, who is from Nagasaki, also have been busy listening to the testimony of hibakusha atomic bomb survivors. Nakamura’s grandmother is a hibakusha.

Takarada went into graphic detail about being caught up in fighting when Soviet troops stormed the Manchurian city of Harbin, where his father worked for the South Manchuria Railway Co., in the closing days of World War II.

He recalled that he ran home with a bloodied shirt from a bullet wound and his mother scolded him for having been very stupid.

Takarada struggled with fever for five days before a military doctor finally got around to seeing him at home. He struggled not to cry out when the doctor used scissors to remove a lead bullet fragment. His mother asked about anesthetics, but the doctor said there were none.

Takarada spent about two months in great pain because all the hospitals were closed and no treatment was available.

He only began talking about his wartime experiences after he turned 60 and felt the government was trying to destroy the spirit of the pacifist Constitution with proposed amendments.

When he thought about all the victims of the war and the atomic bombings of Hiroshima and Nagasaki, Takarada said he could no longer remain silent.
But he hesitated at first, fearing his comments would be met with a negative reaction.

He said that his survival in the war left him less afraid of speaking out.

Takarada described how he heard about the atomic bombing of Hiroshima on Aug. 6, 1945, and the end of the war on Aug. 15, 1945, while living in Manchuria.

After listening to Emperor Hirohito's radio broadcast announcing Japan's surrender, Takarada said he asked his father, “We didn’t lose, did we?”

But his father responded, “No, Akira, everything is over.”

Takarada first came into the public spotlight as the lead actor in the first “Godzilla” movie released in 1954.

Takarada was told by Toho Co. studio bosses that he would be the lead in the third movie that he was to appear in. The script had Godzilla written on its cover in red ink, so Takarada asked, “Am I to play Godzilla?”

Takarada was told he would play an employee of a salvage company.

The producer told the staff the movie was about not only the atomic bombings of Hiroshima and Nagasaki, but also the exposure to radiation at Bikini Atoll by the Daigo Fukuryu Maru (Lucky Dragon No. 5) fishing boat.

For those reasons, the producer said Japan had a responsibility to express opposition to nuclear weapons and that the movie was not just about a monster.

Takarada recalled that when he saw the preview of the movie, he cried at the sight of the dead Godzilla because he felt it was also a hibakusha due to its exposure to radiation from a hydrogen bomb test.

Watching the movie and listening to the dialogue among the film's characters many years later made Takahashi realize that people in those days were still well aware of the dangers of radiation exposure.

Nakamura added that while it is difficult to get across a political message in other ways, movies like Godzilla could more easily spread the message about the dangers of nuclear weapons.

Takarada also revealed that the American company that bought the movie rights for the United States re-edited the original version to remove all inconvenient references to the dangers of nuclear testing.

It was only many years later that the original version was shown in the United States.

Takarada explained that Godzilla is now considered a “hero” around the world and many fans come to get his autograph at the film festivals dedicated to Godzilla movies.

“But the bumpy Godzilla figure is difficult to sign, so I just write an initial on the heel,” Takarada said.

Takahashi and Nakamura also talked about their activities after the TPNW took effect in January and their visits to Diet members to get their views on the treaty.

Takahashi said one thing he learned from speaking with Diet members was the lack or low level of understanding among them regarding the TPNW.
Nakamura is also involved in a students’ group to raise awareness among the public about nuclear disarmament.

She called for more sustainable ways to pass on the stories of hibakusha, noting that many university students who volunteer for such activities while still in college abandon such efforts once they land a regular job.

“We are trying to find how to make this our way of earning a living,” Nakamura said.

Takarada said he was impressed at hearing the ways in which young people today are thinking seriously about such issues.