In memory of the only hibakusha with an Olympian pedigree 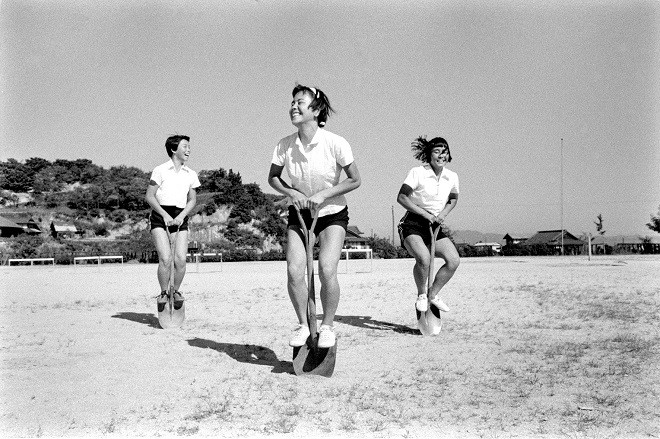 HIROSHIMA--Hailed as the “Shot-put King,” Shizuo Takata became a six-time Japan National Championships winner after he turned 18 and went on to compete in the 1936 Berlin Olympics.

Just nine years later, Takata's life was transformed when an atomic bomb detonated over his native city of Hiroshima, leaving him with acute radiation sickness that finally claimed his life when he was 54 years old.

However, the former Olympian found solace in photography and gradually built a reputation for his skills behind the lens.

His 58-year-old photographer grandson, Toshiaki, decided that the Summer Games, which have just ended in Tokyo, offered a perfect opportunity to show off his grandfather's artistry with a camera.

It is the first such exhibition of Takata's works and is being held in his hometown. The exhibition at the Izumi Museum of Art in Hiroshima's Nishi Ward runs until Aug. 29.

Although Takata lost in a preliminary round at the Berlin Olympics, he was a standout shot putter who was invited to friendly games staged across Europe.

After he retired from the sport, he worked as a secretary to the president of Chugoku Haiden, present-day Chugoku Electric Power Co., in Hiroshima.

On the morning of Aug. 6, 1945, Takata was invited out for coffee by a colleague. But he declined, saying he had pressing work to attend to.

His office was about 680 meters from ground zero. Takata was buried under rubble after the ceiling and walls collapsed.

When he crawled out, covered in blood, he felt a sharp pain in his shoulders and Achilles tendon. Walking with a limp, Takata helped to dig out colleagues from the debris.

He then went to search for his eldest daughter, Chizuko, who was attending school in the city. She suffered serious head injuries in the blast and died two weeks later at the age of 14.

His memories of competing in the Berlin Olympics nine years earlier saved him from despair.

Cameras were distributed by the Berlin Olympics organizers so participants could keep a record of the Games, viewed by Hitler as an opportunity to promote his government and Nazi ideals based on racial supremacy.

He continued taking pictures of his family after he retired as an athlete.

In 1954, when he was beginning to feel better, he started taking photos of Hiroshima with a new Leica camera.

One photo shows a U.S. couple walking with their arms linked and smiles on their faces in the Peace Memorial Park against the backdrop of the Memorial Cenotaph dedicated to the atomic bombing victims. Shot in 1958, 13 years after the bombing that claimed tens of thousands of lives, the photo is titled "Heiwa e no Michi" (Road to peace).

In another photo, female students are seen jumping on a shovel to imitate a pogo stick.

Takata left a note with a photo of a stray dog wandering inside the Atomic Bomb Dome, looking back on himself immediately after the bombing: "I was also wandering around without knowing what to do, just like the stray dog."

Takata took more than 1,400 photos that vividly captured track and field club members, some of which were published in a 40-part series that ran in a specialty magazine.

"Junbi Undo" (Warm-up), which captures the dynamism of an athlete with an outstretched leg, won a prize at an international photo contest held alongside the 1960 Rome Olympics.

Takata was eagerly looking forward to watching the 1964 Tokyo Olympics. But with acute radiation sickness taking its toll, he suffered a stroke and died in December 1963 at age 54.

In 2018, a study by Mikiko Sone, a professor emeritus at Hiroshima City University and a onetime Olympic athlete herself, showed that Takata was the world's only Olympian who became a hibakusha, or atomic bomb victim. Her study focused on Olympians killed in battle.

"I feel my grandfather's message especially in four photos shot in the same composition," Toshiaki said.

They include: the American couple walking with their arms linked with a smile on their faces; an Indian woman dressed in a sari; a family of five from Europe; and a one-footed Asian man on crutches.

Each photo was taken in front of the Memorial Cenotaph in the Peace Memorial Park.

When the photos were taken in the 1950s, war was raging in Vietnam and the Korean Peninsula against the backdrop of the Cold War.

Takata once described his feelings for his works: "It's not people who are bad. It's wars and atomic bombs. I want to grasp the hands of people from around the world and take 'a step toward peace.'"