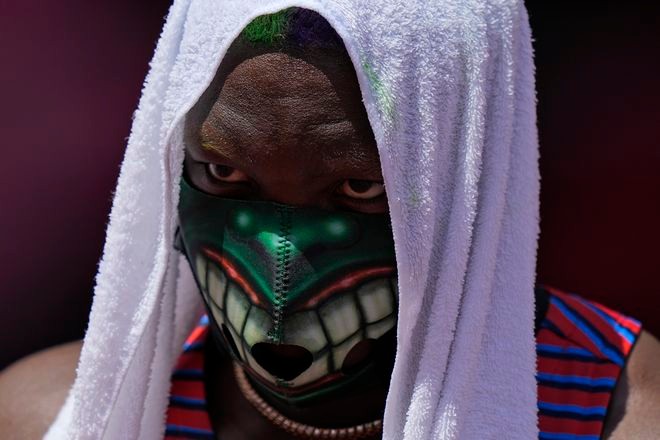 Raven Saunders, of United States, rests between throws in the final of the women's shot put at the 2020 Summer Olympics on Aug. 1 in Tokyo. (AP Photo)

As competitors battled for the podium on the third day of Olympic athletics on Sunday, it was Tokyo's stunning heat that perhaps dished out the most pain.

Punishing conditions greeted the athletes as a trackside thermometer in the open, placed about 50 metres from the finish line, touched 40 degrees Celsius (104°F) and the humidity hovered around 60%, with sun beating down on the fan-free Olympic Stadium.

In the sweat- and heat-soaked media section, reporters donned wet towels as the women's 3,000 metre steeplechase qualifier played out on the track, the event's trademark water hazard appearing more enticing than ever.

The risks of heat-stroke at one of the hottest Games on record are borne by the athletes, but also by the thousands of staff, especially at outdoor venues.

The Director General for the Games, Toshiro Muto, told reporters on Sunday 30 people involved in the organisation of the global sports showpiece including volunteers and contractors have suffered heat-stroke, but all had mild symptoms.

The Tokyo Games, from July 23 to Aug. 8, coincide with the year's hottest weather in Tokyo where the temperature can spike to 35 degree Celsius (95°F) or more.

Conditions at the unshaded pitch of the Olympic hockey stadium were sweltering.

In the first quarter-final match between Germany and Olympic champions Argentina, which kicked off at 9:30 a.m., officials doubled the usual two-minute breaks between quarters to allow players to cool down.

Players from the Netherlands were wearing cooling vests during the warm-up period before their clash with Australia that got underway at noon.

Last Friday, a Russian archer fainted in the heat during a qualifying Olympic round.

On Wednesday, tennis world No. 2 Daniil Medvedev said a player "can die" in the heat that is stifling Tokyo. The sports' governing body later agreed to delay match start times in response to similar complaints by other players.

Organisers have deployed a host of tools - from mist-spraying stations to cooling vests - to beat the heat while handing out salt tablets and ice cream to volunteers.

Tokyo has also used roads that reflect heat or pavements that absorb water to stay cool and the organisers moved the marathon and race-walk to the cooler northern city of Sapporo.