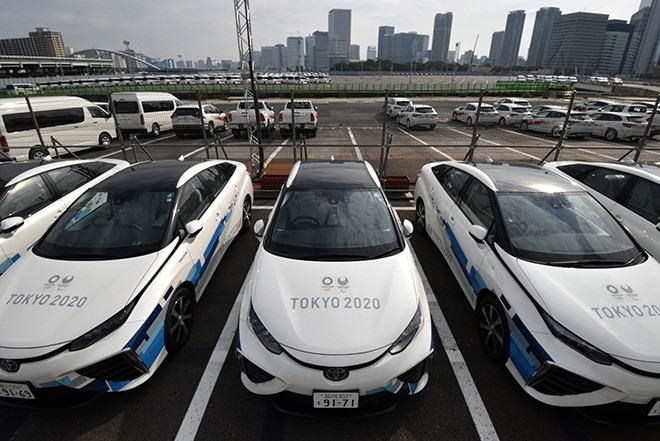 Vehicles used for the Tokyo Olympics and Paralympics at a depot in the capital's Chuo Ward. (Pool)

Staging such a gigantic event as the Summer Games was always going to present a massive challenge, but add a surging pandemic and an expanded state of emergency and things start to look very grim, especially from the viewpoint of volunteers doing their level best to make things work smoothly.

For one thing, Tokyo Olympic organizers had little time to fine-tune everything for the two-week event as the government hemmed and hawed over whether to allow spectators and then, at the last minute, announced extended emergency curbs as COVID-19 cases nationwide started hitting alarming levels.

The blazing heat isn't making things any easier, either.

The army of 50,000 or so volunteers from across Japan on hand to help out are voicing dismay at the way things are being run, citing a lack of preparation and coordination.

Some volunteers work as “Olympic family assistants.” Their job is to serve as guides or interpreters for officials of the International Olympic Committee and the national Olympic committee of each nation and territory taking part in the sports extravaganza, already delayed by one year due to the global health crisis.

Their day usually starts by escorting officials from high-end hotels in the capital in cars allocated for them to the various competition venues.

A common gripe is that national Olympic committee officials often bitterly complain to volunteers that their cars arrive late to pick them up, sometimes by as much as 30 minutes to an hour, when they are waiting to be driven to a competition site to root for their athletes.

The primary reason for such delays rests with T-TOSS, an app for vehicle allocations, downloaded on smartphones provided to volunteers by the Tokyo Olympic organizing committee. The app sometimes does not function properly.

Guides know only in the morning of each day which competition site officials will be heading to based on the latest performances by the athletes.

Then, guides processed written requests for the number of vehicles they would need and where they would be going.

But this proved troublesome with a flurry of miscommunications between them and officials, so they switched to a file shared on the organizers’ computer from July 25.

One problem is that the file can be overwritten, which leads to new problems.

The task of dispatching vehicles is compounded by the fact that vehicles are divided into several ranks, depending on the size and makeup of Olympic delegations. Guides also need to take into account what types of vehicles and services are needed based on the status of the officials they will be accompanying.

One frustrated volunteer urged the Olympic organizers to explain to national Olympic committee officials that the T-TOSS app was not fool-proof and occasionally malfunctioned.

But the individual did not get a clear-cut answer.

“The organizers leave all the explanations and responses to complaints to us to handle,” the person said.

An official with the organizing committee in charge of transport acknowledged July 31 that overseas officials sometimes had to wait for their vehicles to turn up.

“The cause of the delay is not a glitch with the computer system, but the difficulty in using the app,” the official said. “But problems are being resolved as we become more adept at using it.”

Some volunteers disheartened by their run-ins stopped showing up, resulting in a shortfall of guides.

At one hotel, the number of guides assigned to it is only three-quarters of the total needed, forcing officials to sometimes head to Olympic venues without guides.

Guides and interpreters are also irked at having to be at the beck and call of officials until late into the evening on occasion.

This happens when officials with national Olympic committee ask volunteers at night to arrange a car for them to travel to a venue where they can celebrate their team winning a gold medal, according to one guide.

Guides, in principle, can call it a day right after putting in up to nine hours, according to rules set by the organizers.

But some said it is not easy to decline foreign officials’ requests when they say they want to go out and celebrate.

In addition to volunteers, an army of drivers is on hand to ferry officials to and from Olympic venues as well as guards stationed at competition sites based on contracts their employers landed.

A bus driver who came to Tokyo from Nagano Prefecture in central Japan is responsible for transporting athletes and officials by bus for the duration of the Olympic and Paralympic Games.

Prior to the Games, he took great pride in knowing he would be playing a role in the massive event.

He drives a bus emblazoned with the Olympic logo.

The driver, who is in his 40s, had assumed Tokyoites would pay special attention to his Olympic-themed vehicle, but was quickly disappointed to discover that most people give it a fleeting glance at best.

“I quickly sensed that people in Tokyo are not happy about the Games,” he said.

A leaflet handed out to volunteers and others before the Games got under way July 23 lists measures they should take as a precaution against becoming infected with the novel coronavirus.

One of the eight points states that those staying at the Youth Education National Olympics Memorial Youth Center in Shibuya Ward for the duration of the Games, like him, must not take their accreditation card with them when they go out.

The driver, puzzled by the edict, quietly made inquiries.

“We should keep it secret that people involved in the Olympics are staying here because it will be criticized,” he was told by an official.

Any thoughts that it was an honor to be part of the Olympics have evaporated, he said.

“This is the complete opposite of the glorious feeling I had been expecting,” the man said.

(This article was compiled from reports by Takaaki Fujino, Hiroyuki Maegawa, Midori Iki and Hidemasa Yoshizawa.)