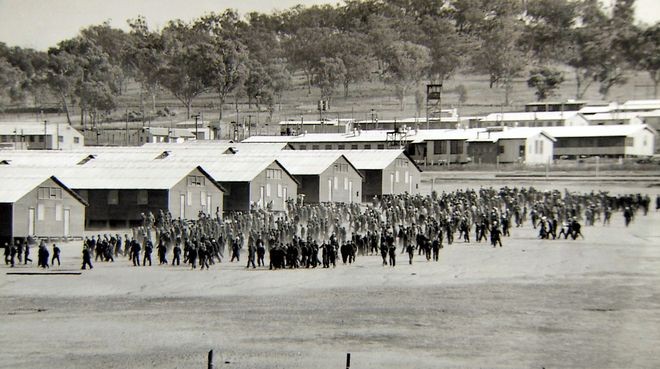 A scene from "Kaura wa Wasurenai" shows a prisoner of war camp in Cowra, Australia. (Provided by Uzumasa Inc.)

A new documentary film investigates what triggered the doomed attempted escape of more than 1,000 Japanese prisoners of war from a POW camp in Cowra, Australia, during the Pacific War.

With no detailed plan for the escape, the purpose was apparently not escaping but being killed to live up to Japan's military code.

"Kaura wa Wasurenai" (Cowra will never forget), by Yasuhiro Mitsuda, a director at the Takamatsu-based Setonaikai Broadcasting Corp., features first-hand accounts from surviving former prisoners involved in the escape attempt from the camp in the southeastern town.

"It's a hidden piece of history about which the survivors had remained tight-lipped," the director said.

Mitsuda became interested in the story through another project in which he interviewed a former interpreter for the Japanese military. The interpreter was remorseful over the deaths of foreign POWs during the war and mentioned those who died in the Cowra escape.

As the prisoners were treated well at the camp, some of them began to hope to make it back to Japan alive.

But 80 percent of them voted yes for the breakout during a meeting.

"There was a mood in which we had to say yes when we actually wanted to say otherwise," one of the survivors says in the film.

The "Senjinkun" (instructions for the battlefield), a military code issued in 1941 to members of the Imperial Japanese forces, stated, "Never live to experience shame as a prisoner," while it was considered a virtue to die in battle.

Those views, Mitsuda believes, led to the escape attempt at Cowra, which was tantamount to committing suicide.

Many POWs used aliases at the camp, according to the film, and survivors kept silent about their experiences long after they returned to Japan.

The film's title reflects the fact that the incident is still remembered in the Australian town even if it is forgotten in Japan, Mitsuda said.

Memorial ceremonies have been held in Cowra on a routine basis for those who died at the camp.

The film is screening from Aug. 7 at the Pole Pole Higashi-Nakano theater in Tokyo's Nakano Ward, a Tokyo Photographic Art Museum hall in Meguro Ward and elsewhere.