Safety of Olympic shuttle bus drivers not part of the deal 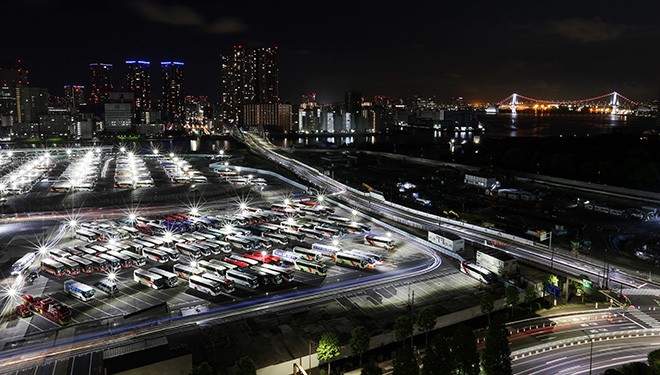 Shuttle buses come and go at a designated parking lot for the Tokyo Olympics in the capital’s Chuo Ward on July 24. (Shiro Nishihata)

Tens of thousands of shuttle bus drivers brought in to help the Tokyo Olympics run smoothly got a lot less than they bargained for: long hours, lousy accommodation and practically no measures in place to keep them safe from skyrocketing COVID-19 cases in the capital.

The National Olympics Memorial Youth Center in Tokyo’s Shibuya Ward gets busy around 6 p.m. when shuttle bus drivers who finished for the day arrive one after another to unwind.

The center is one of multiple designated facilities to accommodate those hired for transportation-related work during the Olympics.

Up to 2,200 buses are scheduled to operate each day for the duration of the Games. Drivers were brought in from around the country, about 63,000 in total.

A driver dispatched from Fukushima Prefecture who returned from work to the center on the evening of July 27 had nothing good to say about his temporary accommodation.

“It’s a prison,” he said. “There is no infection control in practice. I am scared.”

He was contracted to work from about a week before the July 23 Opening Ceremony was held and is required to be on hand for about a month.

His job is to shuttle media representatives to and from the International Broadcast Center and Main Press Center in Tokyo’s Ariake district, as well as designated hotels.

His shifts require him to work 10 days straight before taking a day off. Although he is supposed to put in an eight-hour day, he started at 5:30 a.m. and finished at 5 p.m. on July 27.

The Tokyo Organizing Committee of the Olympic and Paralympic Games said 600 or so contractors dispatched bus drivers for the Games.

Multiple facilities were made available in the Tokyo area for the drivers, who go to one of three designated bus parking lots to start their day.

Accommodation is free, but meals are not provided.

The driver said his room has no running water and he is forced to share a bathroom, shower and sink with other drivers.

When he first turned up at the facility, he was handed a guidebook that urged drivers to “avoid the three Cs”: confined spaces with poor ventilation, crowded places or venues with many people nearby and close-contact settings such as engaging in conversations with others.

But drivers still have to line up each morning and evening to use their crowded shared spaces.

“Infection measures are in place inside of the bus,” the driver said. “But there is always a real possibility of a cluster infection outbreak because (drivers) meet Olympic-related people from all over the world every day.”

To add to the man's woes, he has not received his COVID-19 jabs. He said his employer did not inform him about the vaccination program in place for those doing Olympic-related work before he was dispatched to Tokyo.

No daily polymerase chain reaction (PCR) or antigen tests are being done for bus drivers, either, he said.

But he will be required to take a test once he finishes his Olympic-related work and returns to his home in Fukushima Prefecture.

Poor infection control is not the only problem facing shuttle bus drivers.

Another driver complained about dining costs and rules that defy common sense.

“Meals are at our own expense,” he said. “And we are banned from going out. Many of the rules are truly puzzling to me.”

His accommodation has few shared spaces that are equipped with a microwave oven to heat up food or an electric kettle to make tea or coffee.

He tries to avoid touching surface areas that may have been contaminated by others, he said.

Bringing alcohol inside the facility is also prohibited.

“My room is so tiny, and I cannot drink alcohol there for the entire (Olympics). It is getting more and more stressful each day,” he said. “I wish I could just have a drink without it affecting my job.”

The man griped that drinking alcohol is not prohibited in the Olympic Village.

Asked for comment on the complaints among shuttle bus drivers about their accommodation situation, a representative of the Tokyo Olympics organizing committee said: “We told the bus operators in advance that the accommodation facilities are not like hotels, and we thought we had obtained their understanding.”

The official pledged “to work together with the accommodation operators to ensure they are run properly,” such as cleaning shared spaces every day.