Hiroshima stung by refusal to honor A-bomb victims at Games 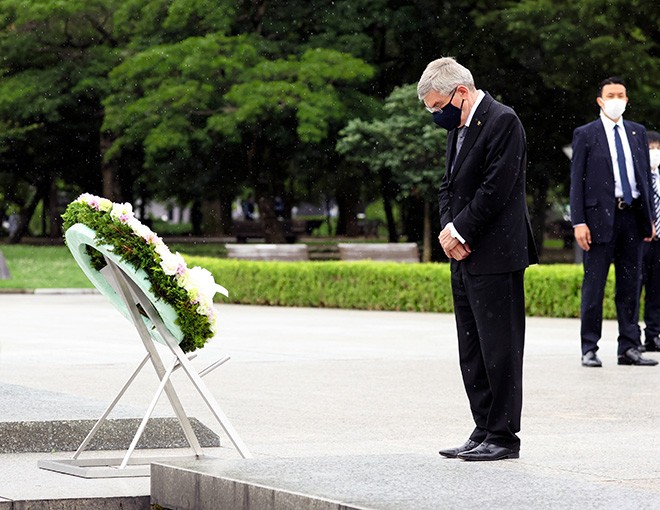 Thomas Bach, president of the International Olympic Committee, offers flowers and a prayer at the cenotaph for victims of the Aug. 6, 1945, atomic bombing of Hiroshima at the Hiroshima Peace Memorial Park on July 16. (Pool)

Olympic organizers’ rejection of Hiroshima’s request to honor victims of the 1945 atomic bombing during the Games has many in the city feeling betrayed by Thomas Bach, president of the International Olympic Committee.

Despite the COVID-19 pandemic, city officials welcomed Bach in July for a tour of memorial sites of the atomic bombing.

They thought the experience was significant enough for the IOC to accept the city’s request to have Olympians offer a moment of silence for the victims on Aug. 6, the day of the bombing 76 years ago.

But the Tokyo Organizing Committee of Olympic and Paralympic Games, which acknowledged Hiroshima’s request to the IOC, said a decision has been made not to call on athletes and officials to have a moment of reflection at Olympic venues and elsewhere.

Toshiyuki Mimaki, 79, acting chair of the Hiroshima Prefecture Confederation of Atomic Bomb Sufferers Organizations, was disheartened by the announcement.

“I’m disappointed,” Mimaki said. “I don’t think having a brief moment of prayer would meet with objections from people around the world.”

On the same day, IOC Vice President John Coates visited Nagasaki to honor victims of the atomic bombing of that city.

Bach, in a speech during his visit, said the Tokyo Olympics would be a “beacon of hope for a better and more peaceful future.”

He said he was “very humbled” and “very touched” by the tour and urged all people to visit Hiroshima one day to become an “ambassador for peace.”

Mimaki said, “It’s a shame that (Bach) came to the Hiroshima Peace Memorial Museum and yet it didn’t make him feel like calling for a moment of silence.”

The Tokyo organizing committee said various reasons were behind the decision not to hold a moment of silence.

For example, the Closing Ceremony of the Olympics scheduled for Aug. 8 has a segment commemorating people who have died in historic tragedies, and that is based on an IOC policy, the Tokyo committee said.

“We want people in Hiroshima to share their feelings during that (segment),” the committee said.

Hiroshima Mayor Kazumi Matsui sent a letter to the IOC dated July 28, requesting a prayer at 8:15 a.m., the time of the atomic bombing.

“We want athletes and related officials to somehow understand the reality of atomic bombs,” the letter said. “Could you please call on them to join in spirit the Peace Memorial Ceremony held in Hiroshima by offering a silent prayer at the Olympic Village or wherever they are?”