Karuizawa town mixed over rise in visitors from virus-hit Tokyo 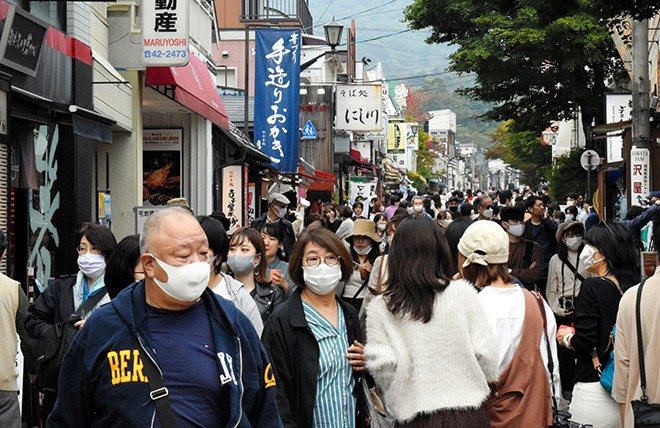 KARUIZAWA, Nagano Prefecture—Tourism officials in this renowned summer retreat are welcoming a sharp influx of visitors as a source of revenue, but others fear the arrivals are bringing something else to the town: the novel coronavirus.

“The locals’ reaction to visitors vary, depending on whether they are in the tourism sector or not,” said Takeshi Matsuda, who has run a Western-style guest house in Karuizawa for more than 30 years.

Hordes of visitors from the Tokyo metropolitan area seem to arrive in this central Japan town of about 20,000 people whenever there is a spike in novel coronavirus cases in the capital.

On the afternoon of July 31, cars with license plates from Tokyo, Kanagawa, Gunma and other prefectures quickly filled up parking lots accommodating about 3,500 vehicles in front of outlet malls sprawling around JR Karuizawa Station.

That day, the capital reported a record 4,058 newly confirmed infections.

A 39-year-old company employee from Tokyo said he and his family opted for Karuizawa as a summer vacation destination this year as a precaution against the virus. In past summers, his family used to go to a seaside resort.

Tokyo is under its fourth COVID-19 state of emergency, and residents have been urged to stay home as much as possible to avoid contracting or transmitting the virus.

“I thought that visiting Karuizawa would not be a big problem since it is not far from Tokyo,” the man said.

He added that he and his family are staying indoors at night to watch the Olympics on TV.

A 48-year-old homemaker in Takasaki, Gunma Prefecture, said she and her daughter came to Karuizawa after they canceled reservations in Tokyo because of the alarming number of new infections in the capital.

According to GPS data by NTT Docomo Inc., the seven-day average of the number of people from outside Nagano Prefecture who visited the outlet mall area of Karuizawa peaked in May, when Tokyo and other populous prefectures were placed under the third state of emergency.

The number rose again when the central government issued the fourth state of emergency for Tokyo.

In late July, the number of visitors to the outlet mall area in Karuizawa grew 1.5 times that of the same period last year.

Karuizawa is not immune to the virus.

The Nagano prefectural government raised the infection alert level for the Saku region, which includes Karuizawa, to 4, the third highest on the local scale of 6.

Mayor Susumu Fujimaki has called on visitors to “take utmost precautions against the spread of the virus.”

Matsuda, the guest house operator, said he has taken measures to protect his employees from the virus with the use of disposal aprons and gloves.

“Still, I am concerned that my staff could become infected,” he said.

Matsuda, 63, said some local residents are staggering their shopping times to avoid large crowds of tourists at supermarkets.

Karuizawa is also seeing an influx of people relocating there permanently, according to statistics for 2020 from the Ministry of Internal Affairs and Communications.

Karuizawa placed top among all towns and villages in Japan in terms of net gain in the number of residents, at 567, the data showed.

Nagano Prefecture followed the three Tokyo neighbors of Kanagawa, Chiba and Saitama prefectures as seeing the highest influx of people relocating from Tokyo.

The population of Karuizawa has edged up over the past years, but the town now appears ready to accommodate a surge in new residents by preparing infrastructure for remote working during the age of the novel coronavirus.

Hosono, 48, said he had never imagined moving out of Tokyo, but he changed his mind after the pandemic struck.

“I came to believe that if I only have to go to the office twice a week, I would be better off living in a place with lots of nature than living in Tokyo,” he said.

When he needs to work at his office in Tokyo, he catches a Shinkansen train from Karuizawa around 7 a.m. and returns home by bullet train departing Tokyo Station after 8 p.m.

He also said senior officials at information technology companies as well as his acquaintances and friends have also relocated from Tokyo to Karuizawa.

“It is like living in Tokyo,” he said of getting together with his friends in the town over the weekends.

(This article was written by Yu Miyaji and Ryoma Komiyama.)