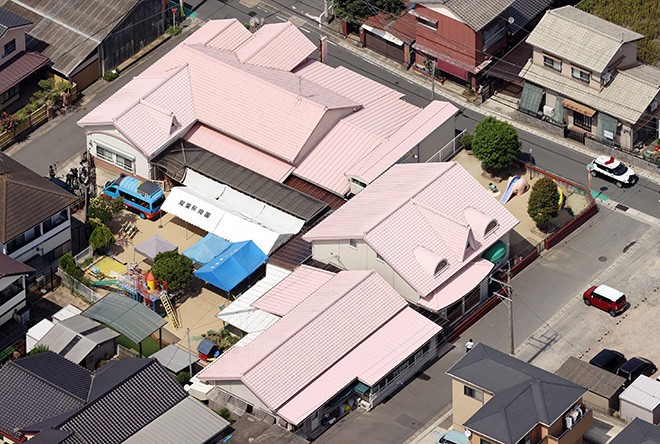 NAKAMA, Fukuoka Prefecture--A 5-year-old boy left alone in a locked school bus for nine hours in blazing heat died of heatstroke in what police suspect was a clear-cut case of negligence on the part of the nursery school he attended.

Toma Kurakake boarded the bus as usual on July 29 to go to the Futaba nursery school here but inexplicably the driver did not check to ensure that all the children got off when they arrived.

As a result, Toma was left alone from the morning to evening for about nine hours. An autopsy showed that he died of heatstroke.

Fukuoka prefectural police are investigating the case as one of professional negligence resulting in death.

Around 5 p.m. on July 29, Toma’s mother contacted the nursery school because her son was not on the bus due to take him home.

It later emerged that Toma was still aboard the bus that took him to school in the morning.

“I didn’t check whether all the kids got off,” the head of the nursery school, who drove the morning bus, was quoted as telling police, according to investigative sources

Toma left home with his mother around 8 a.m. on July 29. When the school bus arrived in front of his home, he greeted the school head and waved goodbye to his mother as usual.

At a little past 5 p.m. as his mother waited for her son to disembark from the bus, she asked, “Where is Toma?” But a member of staff simply said, “Toma didn’t come.”

His mother rushed to the school only to be told her son had been transferred to a hospital.

When she got there, she was told by a doctor and a nurse that “he has passed away.”

Toma always sported a cheerful smile and loved being around his mother. At night, they slept in the same bed. They had promised to go to an aquarium together.

“He is a kind of active boy who cheers up others around him,” his mother said. “I was happy that he was just here.”

He had been looking forward to attending elementary school next spring and playing soccer.

“Did he suffer greatly in the bus? Why didn’t they get him off the bus? I can’t believe why he is not here today. Why only my son …,” his mother said as she sobbed.

Police determined that the school head did not collect bus cards to check children’s attendance or absence at the time they boarded in the morning.

The school head often drove the bus herself and did not make it part of her daily routine to collect the cards to tick off attendance. This, prefectural police said, suggested shocking negligence by the school head and other staff.

The school head also did not check inside the bus after the children got off and locked the vehicle.

The door can be opened from inside, but it is difficult for a small child to do it, according to the police.

Toma is estimated to have died around 1 p.m. on July 29, according to investigative sources.

The bus cards are a daily record of when children get up in the morning and the state of their general health, according to parents and a nursery school lawyer.

When children board the bus, school staff are supposed to collect the cards from their parents or custodians to check attendance or absence.

When the school head drove the bus on the morning of July 29, no other staff were on hand to collect the cards from the seven children, including Toma.

According to investigative sources, Toma’s card was found inside his school bag on the bus.

After the children arrived at the nursery school, Toma’s teacher noticed he was absent but thought no more about it as there was no card indicating he would be off that day. The teacher did not get in contact with Toma's parents to confirm his absence.

Prefectural police officers searched the nursery school on Aug. 1 and took away 63 items, including files on the staff’s attendance sheet and manuals on crisis management.