Two white orcas appear in a nature tour off the coast of Rausu on Hokkaido on July 24. (Provided by Shiretoko Nature Cruise) 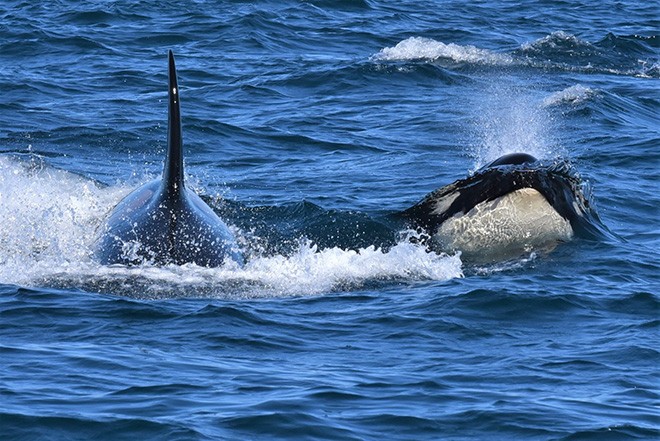 RAUSU, Hokkaido—Two extremely rare all-white killer whales were seen splashing in waters off Hokkaido in what tour operators say could be the world’s first such sighting.

In ordinary years with the arrival of summer, sperm whales have replaced orca pods among cetacean species seen in the Nemuro Strait off this town on the Shiretoko Peninsula, a UNESCO World Heritage site.

But this summer, participants of a nature tour have not only seen dozens of the apex predators but also white killer whales.

The white orcas appeared on July 24, according to the Shiretoko Nature Cruise, operator of whale-watching tours based in Rausu.

They swam beside each other among a pod of about 20 individuals. The pair is believed to be a male and a female judging from the size and shape of their bodies and dorsal fins.

“We are seeing more orcas this year than usual,” said Yuki Hasegawa, captain of the Shiretoko Nature Cruise boat. “Two white individuals seen swimming side by side may be unprecedented in the world.”

White orcas have been sighted at only 10 locations in the North Pacific over the past 100 years, according to Hiroshi Oizumi, a professor of marine ecology at Tokai University.

The Nemuro Strait of the northern main island of Hokkaido is the only place in Japan where white killer whales have been reported. Other places include the west coast of Canada and Aleutian Islands in the U.S. state of Alaska.

The precise cause of the all-white coloration of the killer whales is still unclear. They could either be albinos, the result of defects in melanin production, or the product of a random genetic mutation known as Leucism, Oizumi said.

White killer whales were also seen off Rausu in May and July 2019, one in a group and the other in a separate pod.

“One of the two individuals spotted recently could be the one seen in 2019,” Oizumi said. “Waters off Rausu may be in the migration range of killer whales.”