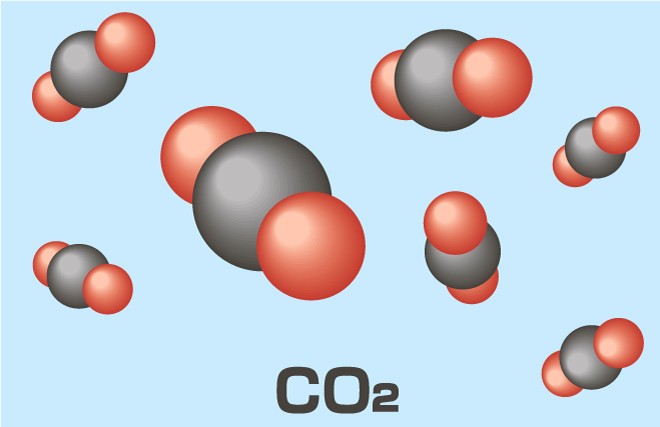 An artist’s rendering of carbon dioxide (CO2) (The Asahi Shimbun)

In a world first, researchers have synthesized plastic by using carbon dioxide (CO2) at an atmospheric pressure, removing the need for toxic chemicals in the process.

The new method is expected to help reduce CO2, a major cause of global warming, by turning it into widely used chemicals.

A team of researchers at Osaka City University, Tohoku University and Nippon Steel Corp. published their findings in Green Chemistry, a journal of Britain's Royal Society of Chemistry.

The researchers synthesized polycarbonate diols (PCDs), the raw material for a plastic called polyurethane. Polyurethane made from PCDs is durable, water-resistant and is often used for making suitcases, sponges and other products.

Under the current manufacturing process, PCDs are synthesized from carbon monoxide and phosgene, a poisonous gas that was used as a chemical weapon in World War I. But there is growing demand for a new manufacturing method that uses nonpoisonous materials.

“We have high hopes for this simple and easy method to become a key technology in turning CO2 into (plastic),” said Masazumi Tamura, an associate professor of catalytic chemistry at Osaka City University. “I think we can apply this method to the synthesis of other materials.”

He added that his research team plans to conduct larger-scale experiments to put the method into practical use.

In their previous study, the researchers synthesized PCDs from CO2 and diols, a kind of alcohol, by using cerium oxide as a catalyst.

But that method leads to a waste of dehydrating agents, which are needed to absorb the water produced in the process. The method also requires CO2 to be compressed into high pressure CO2.

In their latest study, they removed the water without using dehydrating agents by causing a chemical reaction at temperatures exceeding 200 degrees to evaporate only the water.

The researchers were able to produce more high purity PCDs than the existing method since they do not need to use dehydrating agents. The new method also does not require the compression of atmospheric pressure CO2.