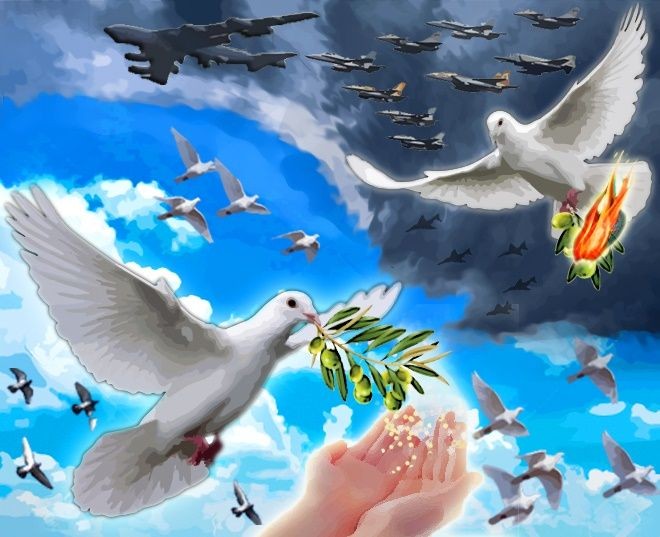 in between the U.S.
and Canadian Falls
double rainbows
--Marshall Hryciuk (Toronto, Ontario)

more prayers for peace
over from the Middle East
eclipse of the moon
--Francis Attard (Marsa, Malta)

mother’s peace center
she wills me her wish
to save the world
--Kath Abela Wilson (Pasadena, California)

The haikuist’s mother wanted to create a space where non-warring people could unite. Before passing away at 95, she made origami cranes, read Michelle Obama’s memoir, and praised the former U.S. president’s visit to Hiroshima Memorial Peace Park. Tsanka Shishkova admired the old trees on the north side of the park known as the bearers of hope.

Sweltering in scorching heat, Satoru Kanematsu was mesmerized by the glaring eyes of Olympian-sized muscular guardian deities at the gate of the Buddhist temple where he prayed for those who died in the world’s first atomic bombing on this day in 1945. Ryan Joshua Mahindapala burned with jealousy in Singapore. Writing from Sibenik, Croatia, Danijela Grbelja suggested some advice.

fighting with mosquitoes
at the war memorial
decline of the day

Writing from Hildesheim in Germany, Beate Conrad offered this one-line tribute to the concrete barrier that closed off East Berlin from the West on Aug. 13, 1961: Berlin Wall a long question’s end.

rainbow...
at wartime they build
the bridge

midnight lightning
the fear is hidden
behind the blinds

Teiichi Suzuki witnessed a mysterious phosphorous light phenomenon. According to folklore, spirits called “onibi” will rise from the corpses of animals and humans if they are abandoned outside to warm on the ground in the rain. Germina Melius strikes fear with a family ghost story from Saint Lucia. Roberta Beach Jacobson recounted a tragedy in Indianola, Iowa.

snuffed out in its prime
another life
that matters

Masumi Orihara penned a haiku while watching a rerun of the 1962 film “Lawrence of Arabia.” Set in the Middle East during World War I, the protagonist played by Peter O’Toole summed up the reason he liked the desert by saying, “It’s clean.” The war story ended badly, and in those desert ruins there still lingers the wistful specter of what might have been if only Lawrence had been listened to.

Sandstorm
everything clean
and just hot

Rob Watkins compiled a short collection of his haiku penned in Newfoundland. Sleuthing through his “notebooks from many years ago,” he submitted this haiku with “the end of WWII as the primary focus.” Kanematsu jumped at the sight of department store mannequins. Richard Thomas likely replied “just looking” to the clerk in Plymouth, U.K. Szewczyk stopped at the edge of park filled with the national flower of Poland -- a WWI remembrance symbol.

in the hat department
the sea sponge crab
motionless

a condom
the edge of the poppy field
lonely walk

With a contemplative frown in Tokyo, Murasaki Sagano circled a rockery filled with tiny star-shaped flowers.

Hibiscus:
just one day’s glory
in the sun

Listening from the Caribbean island of Saint Lucia, Germina Melius is all ears for the Tokyo Olympics--scheduled to end the day before Mountain Day. Kanematsu worried for the athletes in the relentless summer heat. Vandana Parashar’s ears ached in Panchkula, India. Eugeniusz Zacharski spirits rose while ascending South Peak in Nepal, the fourth-highest mountain in the world.

mountains of words
my ears agape
watching the elevator

cicada’s cry
the harshness of words
I never understood

Lhotse climb
my shadow
leaving me

Writing in North Carolina, Huffman referred to a play by Samuel Beckett (1906-1989) in which two characters waited for someone who never showed up. As a resistance fighter in WWII, the playwright experienced the agony of waiting for help to arrive. The title of his work became a metaphor for humanity waiting for a revelation of God’s presence in the midst of destruction.

Find peace at http://www.asahi.com/ajw/special/haiku/. The next issues of the Asahi Haikuist Network appears August 20. Readers are invited to send haiku about a cool drink on a postcard to David McMurray at the International University of Kagoshima, Sakanoue 8-34-1, Kagoshima, 891-0197, Japan, or e-mail to mcmurray@fka.att.ne.jp.