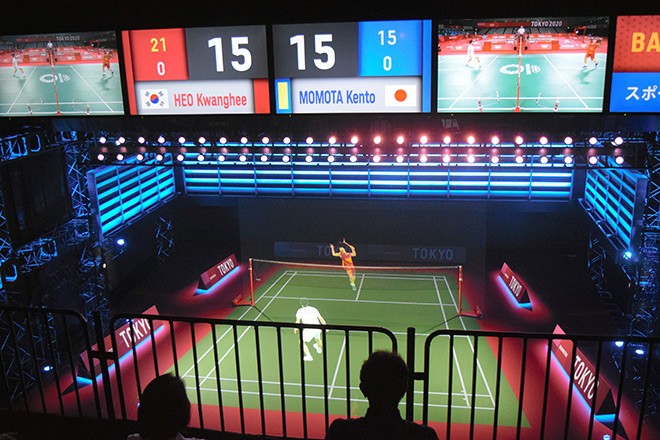 The 2020 Tokyo Olympics had been hailed as a prime opportunity to showcase the latest in Japanese technology and futuristic visions to the world.

But now that the Games have started in front of largely empty stands, companies like Nippon Telegraph and Telephone Corp. are lamenting the missed opportunity for their products to take center stage.

NTT researchers had worked on a communication technology called “Kirari!” since 2013, when Tokyo won the bid to host the 2020 Summer Games.

The technology offers a visual experience that “enables viewers at a remote site to feel as if they are actually sitting in the stands at the stadium where the sporting event is taking place,” according to NTT.

The company expected to showcase Kirari! and other technologies to domestic and global audiences at the Olympics.

“I am disappointed that we could not unveil the technology to the public,” said Shingo Kinoshita, 52, of NTT Human Informatics Laboratories, who has led the development of Kirari!

The company on July 30 showed an Olympic badminton match using the technology at Miraikan, the National Museum of Emerging Science and Innovation, in Tokyo’s Koto Ward.

The actual match was being played at the Musashino Forest Sport Plaza, 20 kilometers from the museum, in Chofu, western Tokyo.

With the use of artificial intelligence, images of the swift-moving badminton players and the sounds of their shoes scuffing the floor, all captured by 8K cameras, were shown at the museum.

NTT said it verified that the new technology works in real time on that day, although the museum was empty because of the COVID-19 pandemic.

Kinoshita said the technology still has potential in the pandemic because it can provide remote audiences with “you-are-there feeling.”

The company is expected to seek ways to apply the technology at various sports events held abroad.

NTT had also planned to set up a 50-meter wide-vision screen at Enoshima Yacht Harbor in Kanagawa Prefecture, the venue for Olympic sailing.

Drones and 4K cameras would capture the competitions occurring offshore and show the images on the screen so that spectators could watch the events without using binoculars.

That project was also scrapped.

The company had planned to offer a similar experience with golf competitions.

But the plan to unveil these technologies to the public was abandoned because of the pandemic.

The company has instead promoted them to Olympic-related people.