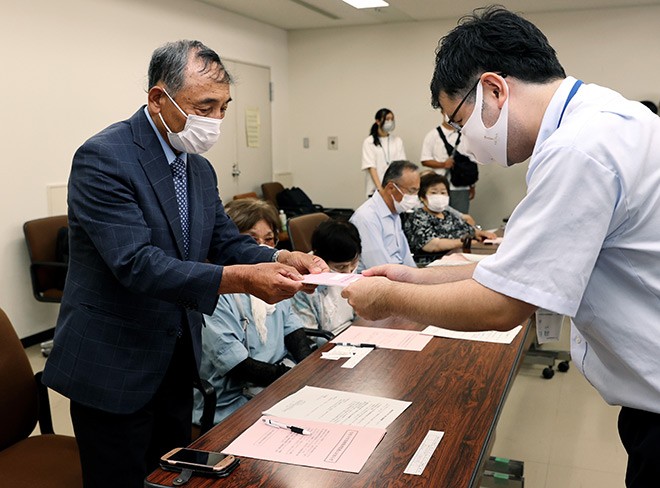 The 84 plaintiffs in the case had fought to be recognized as hibakusha because they were hit with the radioactive black rain that fell in the immediate aftermath of the dropping of the atomic bomb on Hiroshima during World War II.

The other 31 plaintiffs involved in the legal action live in Akitakata city and the towns of Akiota and Fuchu in Hiroshima Prefecture, where the local governments have also begun distributing the booklets.

Hiroshima city officials handed out booklets to 10 plaintiffs between the ages of 70 and 99 who visited the municipal office on Aug. 2, and explained how they can use them for free medical services and free biannual health checks to which they are now entitled.

“This was my lifelong dream,” said Masaaki Takano, 83, the head of the plaintiff team, as he gripped his booklet with both hands. “But many people died during the lawsuit, so I feel the heaviness of this booklet.”

Those looking forward to receiving their booklets expressed joy, but some made pointed criticisms about how long and hard they had to fight for them.

“Finally, I obtained it,” one person said, while another remarked, “The decision should have been made earlier.”

In 2015, the “black rain” lawsuit was filed by Hiroshima city residents and others who were exposed to the rain in August 1945.

Last summer, the Hiroshima District Court ordered the government to issue the plaintiffs a “hibakusha kenko techo,” the certificate booklet that entitles the holder to free medical treatment and other benefits.

When the Hiroshima High Court upheld this decision on July 14, the health ministry urged the government to take the case to the Supreme Court.

But under stiff resistance from the Hiroshima prefectural and municipal governments in charge of issuing the hibakusha booklets, Prime Minister Yoshihide Suga decided not to appeal, allowing the high court’s verdict to be finalized.

In the Hiroshima city office meeting room, area resident Yoshiko Sumitani, 81, gazed at the pinkish booklet she just received from a city official.

When she was 5 years old, she was exposed to the black rain in what is now Akiota town and was diagnosed with colon cancer a decade ago.

“Finally, I was able to obtain the certificate booklet that I had given up on,” she said. “I realized that our long-time request was accepted.”

She wiped her tears away with her hands, which were shaking and still holding her booklet.

Hiroshima resident Fudeko Endo, 83, also received a booklet while sitting there in her wheelchair alongside her husband, Sakau, 90.

“I have always told the truth, but they didn’t believe me,” she said. “I am happy to receive it.”

Some of her friends who were exposed to the black rain with her on that fateful day were not among the group of plaintiffs.

“Many people do not launch lawsuits due to time and financial reasons,” she said. “I hope that they will be also saved.”

Yoshinobu Shono, 76, was exposed to the black rain while he was on his mother’s back when he was just 11 months old.

He joined the plaintiffs with his three former elementary school classmates, but one of them developed cancer and now must remain in a hospital.

“I am glad it was decided that the certificate booklets would be issued while he is still alive, but some people have already died,” he said. “The decision should have been made much earlier.”

A statement made by Suga on July 27 said the government will “consider responding swiftly to save” people who were not included among the plaintiffs.

According to the Hiroshima city government, as of Aug. 2, it had received 68 inquiries from others not involved in the legal action.

“I was exposed to the black rain like the plaintiffs, but can I apply?” one person asked.

“Is my area covered by such a relief (program)?” another queried.

(This article was written by Taichi Higa and Hiraku Higa.)