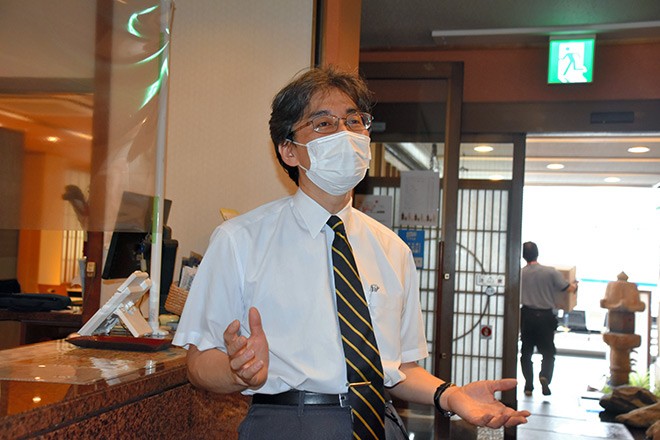 The Olympic experience for a Tokyo hotel designated as an accommodation facility for staff members of the Games has been filled with frustration and a sense of emptiness.

First, there are all the no-shows.

The Tokyo Organizing Committee of the Olympic and Paralympic Games made 101 reservations at the Sumisho Hotel in Tokyo’s Chuo Ward for period from July 23 to Aug. 1.

Only five of the guests showed up.

“I feel empty,” the owner of the 83-room hotel in the Nihonbashi district said of the situation.

The hotel was designated by the organizing committee to provide rooms for staff of the Games who work until late at night and cannot go home.

The organizer booked 11 rooms for July 23, the day of the Opening Ceremony.

But nobody checked in on that day.

Takashi Tsunoda, president of the hotel, waited as the Opening Ceremony went on later than expected. He thought the guests would be tired after such a long day and might like to soak in a bath to refresh.

He decided to keep the spa area open until 3 a.m., well past the usual midnight closing time.

“One person will check in later, maybe,” the caller, a representative of the organizer, said.

Tsunoda and the hotel staff waited for more people to show up. But the hotel only had the one guest that night.

The no-shows continued after the first night.

The organizer has paid for all of the booked rooms, but that is not the point, Tsunoda said.

“How is this OK when the costs of the Olympics are paid for with taxpayers’ money?” he said. “This is exploitation of our time and work.”

The public money spent on the empty rooms is not the only thing being wasted.

The reservations included a breakfast service.

The hotel must place orders for breakfast ingredients two days before the guests’ checkout day. Prep work begins around noon on the day before checkout.

But with so many guests not even staying at the hotel, the prepared breakfasts have been thrown away.

“The reservation includes breakfast, so we have no choice but to dispose of the (food),” Tsunoda said disconsolately.

The hotel received only four guests during the period from July 28 to 31.

Hotel staff still had to prepare for the possibility that all of the customers would show up, even in the early hours of the morning.

Some employees have had restless nights, not knowing if and when a customer might arrive at the front desk to check in.

“I did not expect so many no-shows like this. I’m in shock,” Tsunoda said.

WE‘RE NOT AN ‘ISOLATION FACILITY’

The hotel’s problems with the organizing committee actually started before the Opening Ceremony.

The hotel initially signed a contract with the organizer to provide accommodations for foreign media representatives.

Between July 16 and Aug. 11, the hotel expected to welcome 40 guests per day for a total of 800, based on the reservations.

The organizer had told the hotel that as a COVID-19 measure, the overseas guests would isolate for 14 days after their arrival in Japan at different designated facilities before checking in at the hotel.

But in mid-June, Tsunoda learned that the foreign guests would come straight to the hotel from the airports without a 14-day quarantine.

“The rule changed at the last minute,” a representative of the organizing committee told the hotel.

After hotel employees voiced concerns about the risk of contracting the virus from the guests, Tsunoda consulted the organizer and changed the plan to accommodate Olympics-related guests who live in Japan.

“We signed a contract with the organizer as a lodging facility, not as an isolation facility,” Tsunoda said.

He said he told the committee, “We are not prepared to put full infection controls in effect if you change the primary rules just before (the Olympics).”

The organizer emphasized the effectiveness of “bubble” to seal off Olympic-related people from the public, but Tsunoda did not buy it.

“Our cleaning staff would enter the guests’ rooms, even though they are considered the ‘general public,’” he said.

The entire ordeal has made Tsunoda feel that the organizer “treats hotels with disrespect.”

Sumisho Hotel has provided accommodations for staff of major sports tournaments and other large-scale events.

But the experience with the Tokyo Olympics is unprecedented, and the way the organizer has handled the situation is baffling, he said.

“There is no way these kinds of things would happen in private businesses,” he said. “My mistrust (of the organizer) is mounting.”