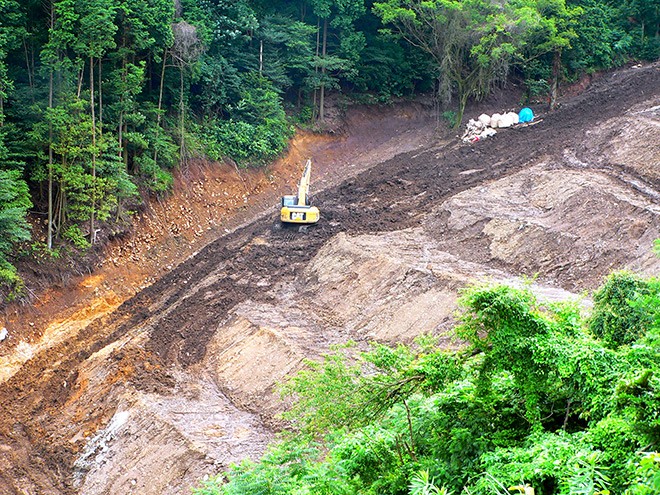 This multi-tiered embankment work high in the mountains above Atami is thought to have triggered a deadly landslide a month ago. (Provided by a reader)

A man intending to go hiking in the mountains of the coastal resort city of Atami 11 years ago was so astonished by what he saw that he stopped his car to snap photos.

The 43-year-old company executive was looking at a multi-tiered embankment cut into the steep mountainside overlooking Sagami Bay in Shizuoka Prefecture.

He vividly recalled that July 9, 2010, day after a massive landslide following heavy rains stripped the side of the mountain of homes and buildings early last month, claiming 22 lives. Five people are still missing.

Local authorities now strongly suspect the embankment was the catalyst for the July 3 disaster.

“It was an abnormal scene because it was so steep,” the man recalled. “I felt it was scary.”

The man was also pretty sure he saw garbage and other waste mixed into the dirt used to create the earthworks.

Seeing as the landfill project was completed the following month, the photos the man took were toward the end of the work.

The landfill was undertaken by a real estate development company based in Odawara, Kanagawa Prefecture, that acquired the site in 2006.

The following year, the company submitted an application to the Atami city government and said the landfill would have three tiers, 15 meters tall and use up 36,000 cubic meters of dirt and sand.

Shizuoka prefectural authorities now estimate that the landfill volume was far larger. There were at least 10 tiers, the height of the embankment was about 50 meters, or more than three times the prefectural ordinance limit, and about 74,000 cubic meters of dirt and sand were dumped there.

The photos taken by the hiker show much more than three tiers. A bulldozer in one image is dwarfed by the scale of the total landfill.

Shizuoka prefectural government officials are now investigating the degree to which the scale of the massive landfill exacerbated the landslide.

One question will be when Atami city government officials knew about the possible danger from the landfill.

Local residents forced to evacuate because of the landslide held a news conference Aug. 2 to announce they were considering filing a lawsuit seeking compensation from the Atami city and Shizuoka prefectural governments as well as the owner of the landfill site.

The Odawara real estate company sold the land to the current owner in February 2011.

“If the city government had stopped the (landfill) work, this manmade disaster would never have occurred,” one of the residents said.