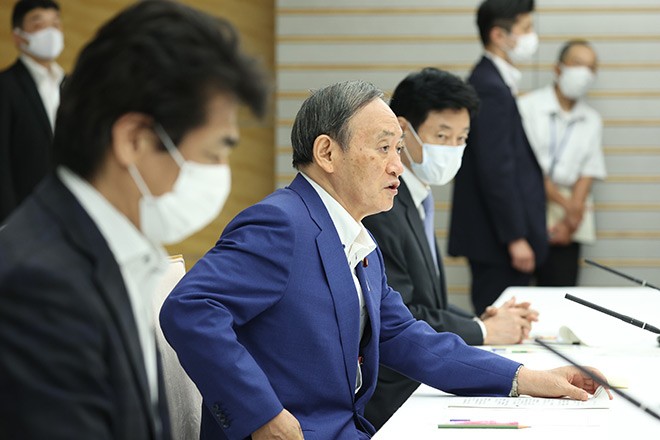 Ruling coalition lawmakers have joined calls for the government to scrap its plan to limit hospital treatment for only the most serious COVID-19 cases and instruct other infected patients to recover at home.

A joint committee of the ruling Liberal Democratic Party dealing with the pandemic met on Aug. 4 and decided to ask the government to retract the proposal.

Earlier, a member of junior coalition partner Komeito made a similar request to Norihisa Tamura, the health minister.

“It is inconceivable that patients with moderate symptoms who require oxygen inhalation should be resting at home,” Komeito lawmaker Michiyo Takagi said on Aug. 4. “I want this proposal to be re-examined, including consideration that it be retracted.”

Her comment was made at the Lower House Health, Labor and Welfare Committee, even though the Diet is currently not in session.

The Suga administration on Aug. 2 decided to ask prefectures to provide hospital treatment only to COVID-19 patients with serious symptoms or who were at risk of developing such symptoms in areas hard hit by the virus.

The measure is intended to avoid a collapse of the medical care structure.

Critics immediately lashed out at the idea of sending home patients who are suffering “moderate” symptoms, such as difficulties in breathing.

Health minister Norihisa Tamura tried to placate concerns, telling the committee session that patients requiring management of their breathing would not be sent home from hospitals or refused medical treatment.

Akira Nagatsuma, a member of the main opposition Constitutional Democratic Party of Japan (CDP), said the government had created “a man-made disaster” by its failure to bring new infections under control and its ill-preparations to bolster the medical care system to deal with the situation.

He asked Tamura if the government was considering apologizing to the public for the current state of affairs.

Tamura said the Delta variant had accelerated the pace of new infections, and that it was difficult to suddenly increase the available medical resources.

“We have to secure enough hospital beds for those at high risk of developing serious symptoms,” Tamura said.

Another participant of the committee session, Shigeru Omi, chairman of the government panel of experts dealing with the pandemic, was asked if he had been consulted about the proposed restrictions on hospitalizations.

Omi said that he has been in discussions with government officials on a daily basis, but he had not been consulted on the hospital proposal. He said the topic never came up in those talks.

Four opposition parties on Aug. 4 agreed to submit a joint proposal to Tamura later in the day asking that the new hospitalization policy be retracted.

“Making such a drastic change in course without an adequate explanation to the public is unforgivable,” he said.

Those on the front lines of the pandemic also raised concerns about the new policy.

“One characteristic of COVID-19 is that no one knows when symptoms will become serious,” said Hideo Maeda, who heads the Kita Ward public health office in Tokyo. “As a public health office, we will be unable to handle the additional burden of following the condition of patients with moderate symptoms who are recuperating at home.”

About 14,000 Tokyo residents are already recovering at home. The new policy will certainly increase that number.

The Kita public health office is already so swamped with work that staff cannot sufficiently carry out such tasks as dealing with infection clusters and tracking down those who may have been in close contact with infected individuals.

Maeda said the new proposal would, in effect, abandon those with moderate symptoms if they are not allowed entry into hospitals.

This is not the first government COVID-19 policy to come under fire.

It took less than 24 hours for the government to retract a proposal to ask financial institutions to, in effect, pressure bars and restaurants to stop serving alcohol under a COVID-19 state of emergency.