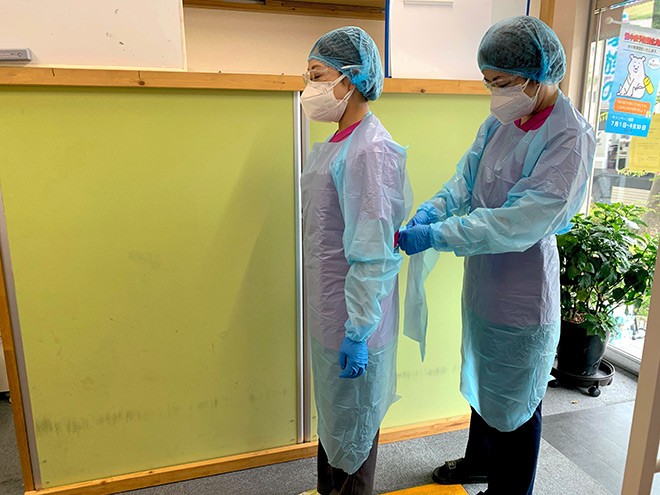 KOBE—Tears welled in the eyes of social worker Shoichi Tatsuta when he recalled the sudden deterioration of COVID-19 patients at their homes, the filthy apartments of those too sick to move, and the unanswered pleas of sobbing family members seeking hospital treatment for their loved ones.

Those conditions occurred in Kobe during the fourth wave of novel coronavirus infections. The current wave around the country is spreading at a faster pace, and Tatsuya fears a repeat of the hellish situation he experienced, only worse under the central government’s new hospitalization policy.

The policy is to provide hospital care only to COVID-19 patients with serious symptoms or at risk of becoming seriously ill. Hospitals will ask those with moderate or less severe symptoms to recuperate at home.

Tatsuta, who operates Cosmos, a home-care service provider for seniors in Kobe, said low-risk patients can quickly take a turn for the worse while recuperating at home, and by then, it may be too late to save them.

“There were many patients who developed severe pneumonia requiring immediate hospitalization but were not admitted to a hospital until just before their deaths,” he said.

More than 15,000 COVID-19 patients had to stay home without access to hospital care in Osaka Prefecture at the peak of the fourth wave. In neighboring Hyogo Prefecture, of which Kobe is the capital, the number topped 1,800.

Aside from those patients, 1,900 infected people in Kobe were in talks with public health officials to find hospital beds or rooms in designated hotels. The corresponding number was 3,500 in Osaka Prefecture.

Tatsuta, 35, and a nurse visited the homes of seniors and disable people infected with the novel coronavirus between late March and late June on a program commissioned by the Kobe city government and public hospitals.

He said the rooms of some patients were covered in garbage and vomit.

One motionless patient groaned, “It hurts” and “I feel terrible.”

Another patient repeatedly asked Tatsuta, “Am I dying?”

Tatsuta and the nurse visited around 25 homes without a break from 7 a.m. to the late evening each day.

After the visits, he compiled a report on each patient. But his work did not end there.

He often received phone calls after midnight from at-home patients saying their condition had worsened. Some callers were terrified by what was happening to them.

Workers at a public health center also called him late at night.

One of his duties as a provider of home-visit nursing care is to report the health conditions of the patients to a public health center.

Public health center workers are in charge of deciding which patients should be hospitalized and finding beds for them.

As of April 26, 1,899 COVID-19 patients were on a waiting list for hospital beds in Kobe, including many whose blood-oxygen levels had dropped and were showing serious symptoms of pneumonia.

Hospitals could not accept them because they were already flooded with patients.

Some relatives of patients who were suffering at home took out their frustrations on Tatsuta.
“Why can’t my husband be admitted to a hospital? You must not have reported his condition properly to the public health center,” one woman snapped at him.

Tatsuta said there was little he could do to ease their anger. He just had to endure it.

Even if his patients finally found a hospital for treatment, it was often too late.

In some cases, he had to tell the patients’ families that the medical facilities had no ventilators or extracorporeal membrane oxygenation, expensive breathing-assisting equipment that require specially trained staff to constantly monitor the patient’s condition.

Some family members sobbed after learning that their relatives could not receive the best possible treatment, even as their chances for survival were becoming slim.

“I cried with families together when I started this program,” Tatsuta said. “But I had to later numb my emotions to keep doing my work.”

One elderly female patient hoped to receive hospital treatment, but she gave up the idea because all of the hospital beds were filled.

Although a doctor visited her home to provide some treatment, her condition rapidly worsened. She ended up in great pain and could not take medicine.

She was finally admitted to a hospital but died within hours of her arrival.

Of the patients he visited during the fourth wave of infections, about 40 were taken to hospitals after their conditions rapidly deteriorated.

Twenty-five of them died.

New COVID-19 cases have fast resurged in Kobe since late July. As of Aug. 2, the number of patients recuperating at home had almost tripled to 608 over just one week.

Tokyo and three surrounding prefectures, as well as Osaka Prefecture and Okinawa Prefecture, are currently under a state of emergency until the end of August.

The government also decided on the new COVID-19 hospitalization policy on Aug. 2 to prevent a collapse in health care systems in hard-hit areas.

Patients who suffer shortness of breath and are confirmed to have pneumonia or require oxygen inhalation are categorized as “moderate” cases.

Those with no respiratory symptoms other than coughing are placed in the “mild” category.

Infected people with “moderate” or “mild” symptoms will be asked to recover at home under the new policy, meaning an increase in the number of COVID-19 patients outside of hospitals.

“It is understandable in some respects because the number of hospital beds is limited,” Tatsuta said of the policy change.

But he warned against assessing cases as “low risk” based on initial symptoms.

“Even if they are considered at low risk of suffering severe illness, I have seen patients whose conditions suddenly worsened,” he said.

Tatsuta called on local governments to set up a system to dispatch doctors and nurses to patients’ homes and to deliver meals and other necessities if patients are denied access to hospital treatment.

DEATH CAME OUT OF NOWHERE

A man in his 60s who was hospitalized for COVID-19 said he remains traumatized by the solitary death of his mother at her home after she contracted the virus.

The man, who lives in Kobe, called her mobile phone around noon on April 21 from his hospital but received no answer.

Although she usually immediately answered such calls, he did not suspect anything serious had happened.

She had shown only minor symptoms and appeared to be faring all right.

But that night, emergency responders discovered her body near her bed. A nurse had called them after the mother did not answer the doorbell.

“My mother was abandoned without treatment,” the man said.

His infection was confirmed on April 13. His mother tested positive on April 17.

On April 20, health workers contacted him about his hospitalization after he developed a high fever, became unable to eat and vomited repeatedly.

He vaguely remembered that his mother called him about his condition that night.

His last words to his mother were, “I will call you back later.”

The Kobe city government said officials were trying to find a hospital for her. When they called her on the morning of April 20, she showed no serious symptoms.

Her temperature was between 35 and 36 degrees. She did say her appetite had decreased, but she had enough water, according to city officials.

The son said he still cannot believe that she died. She was well enough to shop, visit a hospital and attend culture lessons.

“Her death came out of nowhere,” he said. “It feels like a relative suddenly died in a traffic accident.”

He made an impassioned plea for local governments to improve the system to cope with the pandemic.

“Local authorities should build a health care system that allows as many patients as possible to be hospitalized,” he said. “They should also exhaust all measures to protect the lives of those without access to hospital care.”