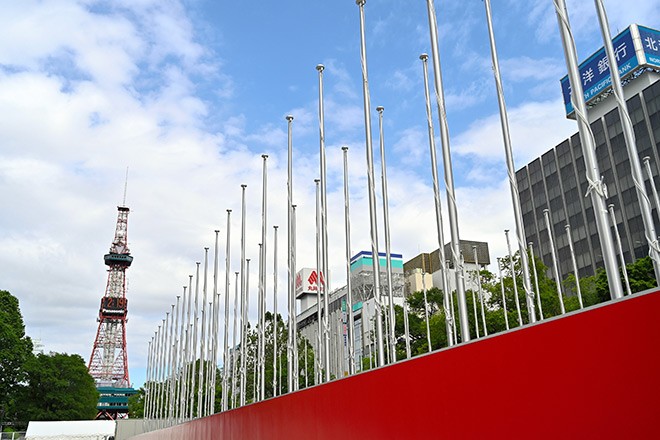 Athletes competing in the Tokyo Olympic marathon and race-walking events scheduled in Sapporo city from Aug. 5-8 are expected to face scorching heat as the mercury surges higher than ever before.

Hokkaido has been hit with record-breaking heat since July. Sapporo city logged 35 degrees in July for the first time in 21 years, and the mercury rose to 34.4 degrees on Aug. 3.

The competition dates are also expected to record high temperatures--around 33 to 34 degrees--in Sapporo.

Organizers are pulling out all stops to combat the dangerous heat and humidity.

Ice baths for the athletes will be prepared in the first-aid and recovery areas set up inside the city’s Odori Park, where the marathon races start and finish.

A total of 14 water supply tables will be set up alongside the marathon course, according to the organizing committee. At nine out of 14 locations, bags of crushed ice will be provided for athletes.

Ambulances will follow behind the runners during the race, while doctors and physical therapists will be at the ready near the finish line.

The marathon and race-walking routes were moved from Tokyo to Sapporo in 2019 because the International Olympic Committee was concerned over the capital’s heat.

But looking at the temperatures recorded at 7 a.m. when the marathons will start, Tokyo logged a daily average for the 10 days through Aug. 3 of 26.4 degrees, while Sapporo recorded 25.6 degrees.

In other words, there was only a 0.8-degree gap in the average temperature between the two locations.

When it came to temperatures recorded at 5 p.m., when the race-walking events start, Tokyo logged an average of 29.2 degrees, while Sapporo’s was 28.8 degrees, leaving only a 0.4-degree difference.

Ambulances were called for 5,831 people suffering from heatstroke across Japan for the week through Aug. 1, according to the Fire and Disaster Management Agency.

Hokkaido recorded 360 people with heatstroke, the third-highest number of all the prefectures. Eight people died in Japan and two of those were in Hokkaido.

As of Aug. 3, out of 173 meteorological observation points in Hokkaido,  68 locations marked their highest temperatures on record this summer, according to the Japan Meteorological Agency.

The central part of Sapporo recorded 35 degrees or higher twice in July because of the extreme heat brought about by a high-pressure system in the Pacific Ocean around Hokkaido.