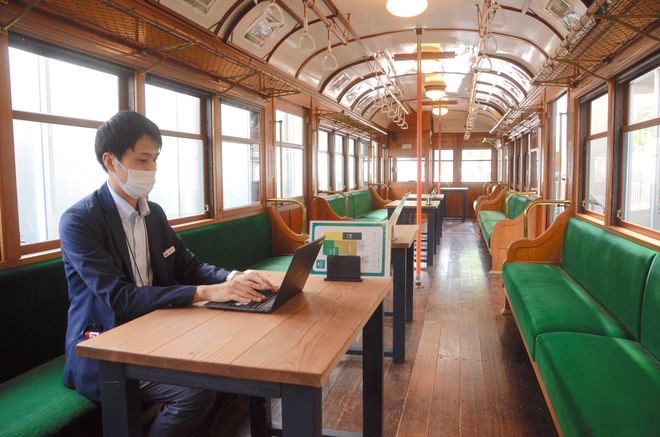 KAWASAKI--Tokyu Railways Co. is offering a novel way to relieve the boredom of working from home day after day with shared offices set up inside a renovated train carriage or a YS-11 turboprop plane.

Its aim is to offer a sense of nostalgia for those desperate to go somewhere else to work while restrictions over the novel coronavirus pandemic remain in effect.

Users have the option of working inside a renovated train car from the MoHa 510 series built in the early Showa Era (1926-1989) and used until 1989 on the company's Tokyu lines or in one of Japan's first domestically produced postwar aircraft operated by a group company.

Tokyu Railways spent around 2 million yen ($18,300) to install desks, power outlets and internet access to create an efficient working environment at the renovated Denbus Workspace, which opened Aug. 1 in Building B of its Train & Bus Museum here.

The museum's Building B was closed in February 2020 after the coronavirus made its appearance in Japan. The company decided to close the building because it houses the Kids World section where it is difficult to avoid a close-contact setting.

The company said it aims to cash in on making effective use of the closed building while teleworking has become the new norm.

With a seating capacity for 29 people, the cost starts at 200 yen per hour.

"There are not so many shared offices in suburban areas, so we can anticipate demand," a company representative said.

It anticipates that those office spaces will be available for about a year. After that, it will consider restoring the offices back to their original purpose if the pandemic is contained.