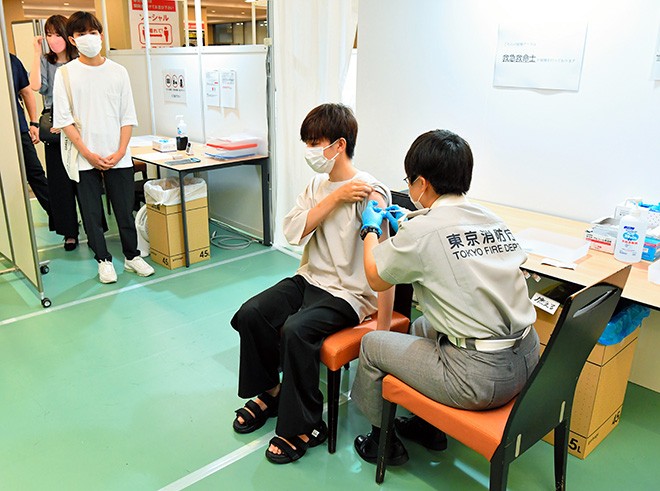 A college student receives a COVID-19 jab at a vaccination center set up at Aoyama Gakuin University in Tokyo. (Pool)

More COVID-19 daily tally records were broken around Japan on Aug. 4 as the Tokyo Olympics were winding down toward the Closing Ceremony four days ahead.

Tokyo metropolitan government officials confirmed a record 4,166 fresh cases, while the southernmost prefecture of Okinawa had a record 602 cases. The two are among six prefectures where a state of emergency will be in place until Aug. 31.

Fukuoka Prefecture on the main southern island of Kyushu reported 752 cases, another record.

In Tokyo, the daily average of cases for the week ending Aug. 4 was 3,478.7, which represented an increase of 78 percent over the previous week.

One additional death from COVID-19 was reported in Tokyo, while 115 patients had symptoms serious enough to require the use of ventilators and other equipment to breathe, up three from the previous day.

According to Okinawa prefectural government officials, the number of new cases over the past week per 100,000 residents was 178.43, the highest figure in Japan. Also, 74.6 percent of hospital beds for COVID-19 patients were filled.

Osaka Prefecture had 1,224 cases, the fifth highest daily tally and the first time the figure exceeded 1,200 since May 1.

The main northern island of Hokkaido reported 366 new cases, the first time it has topped 300 since June 3.