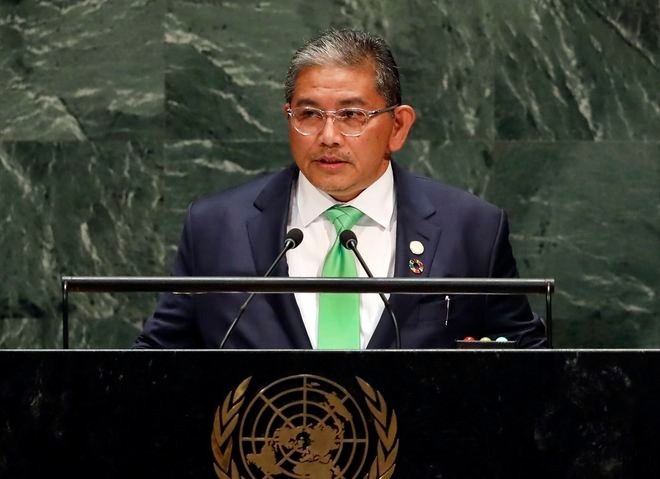 The foreign ministers from the Association of Southeast Asians said Erywan will begin his work in Myanmar to “build trust and confidence with full access to all parties concerned."

The 10-nation bloc has been under increasing international pressure to act on violence and instability in Myanmar, an ASEAN member. Myanmar's military in February toppled the elected government of Aung San Suu Kyi and cracked down on opponents.

In a joint statement Wednesday after their annual meeting, the ministers reiterated their concerns about the situation in Myanmar, including reports of fatalities and violence. But they stopped short of calling for the release of political detainees, saying only they “heard calls” for their freedom, in a reflection of the sensitivity of the issue.

The regional group is hamstrung by its bedrock policy of noninterference in the domestic affairs of member nations and by its consensus decision making, meaning just one member state can shoot down any proposal.

Erywan was among at least four candidates proposed by ASEAN, and Myanmar was believed to have preferred a former Thai diplomat. Its decision to yield to the group’s pressure indicated its military rulers are still hoping to rely on ASEAN support as they face international condemnation.

Sidharto Suryodipuro, head of ASEAN Cooperation at Indonesia’s Foreign Ministry, told reporters in Jakarta that it was an arduous process to persuade Myanmar to commit to the envoy and the mediation process. He said Erywan is expected to draw up a timeline on his mission to ease the violence and meet with all parties involved.

He said the joint statement doesn’t amount to ASEAN’s recognition of the military government.

“Myanmar must now work together in the context of ASEAN because the success of the special envoy will also be Myanmar’s success in settling a crisis that has become multilayered, involving not just politics but also economics and worsened by COVID-19,” he said.

Even with the envoy's appointment, it remains uncertain if and when the Myanmar military leaders will allow access to Suu Kyi, who has been detained with other political leaders and put on trial on a slew of charges, diplomats have said.

More than 900 people have been killed by Myanmar authorities since the February takeover, many in anti-government protests, according to a tally kept by the independent Assistance Association for Political Prisoners. Casualties are also rising among the military and police as armed resistance grows in both urban and rural areas.

Myanmar’s troubles have deepened with its worst coronavirus surge, which has overwhelmed its crippled health care system. Its military leader, Min Aung Hlaing, has repeated his pledge to hold fresh elections in two years and cooperate with ASEAN on finding a political solution.

Some ASEAN lawmakers responded warily to Erywan's appointment, noting that he led a delegation to Myanmar in June and met only with the junta.

Erywan must ensure “he does not become a pawn in the junta’s game" of using ASEAN to gain international legitimacy while it continues its oppressive rule, said Kasit Piromya, a Thai board member of ASEAN Parliamentarians for Human Rights.

In another touchy issue, the ministers said ASEAN and China have completed the preamble for a proposed “code of conduct," a nonaggression pact the two sides have been negotiating since 2017 to avoid armed conflicts in the disputed South China Sea.

China, Taiwan and ASEAN members Brunei, Malaysia, the Philippines and Vietnam have overlapping claims in the disputed waters and have been locked in increasingly tense territorial standoffs for decades. China turned seven disputed reefs into missile-protected island bases in recent years, ratcheting tensions with rival claimants, along with the United States and its allies.

Two Southeast Asian diplomats said the preamble consists of principles that will reflect the rival claimant states’ adherence to international law, including the 1982 U.N. Convention on the Law of the Sea.

An analyst expressed little hope the proposed pact can effectively restrain aggression in the disputed sea, given a Chinese insistence on its vast territorial claims and penchant to interpret agreements in a way that will buttress its claims.

“I hold no illusion that the code of conduct, when it comes to pass, will be of meaningful effect in constraining Chinese coercive behavior in the South China Sea,” said Hoang Thi Ha of the ISEAS-Yusof Ishak Institute in Singapore.

China has refused to recognize an international arbitration ruling in 2016 that invalided most of its claims in the South China Sea.