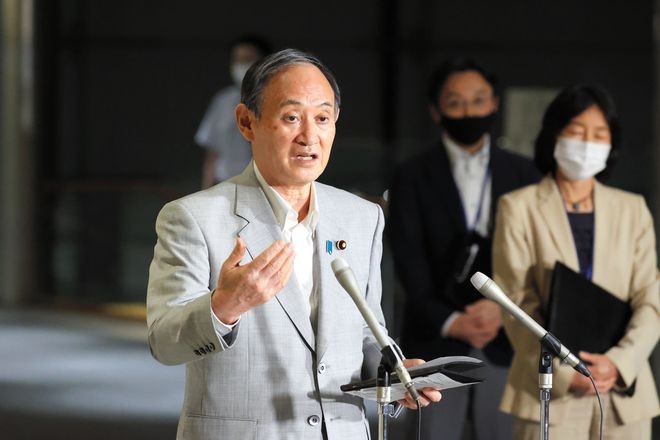 In "Nobi" (Fires on the Plain), a masterpiece war novel by Shohei Ooka (1909-1988), the protagonist is a private in the Imperial Japanese Army who has tuberculosis and gets sent to a field hospital overflowing with wounded, blood-covered soldiers lying on the floor.

He is yelled at by the army doctor for seeking hospitalization for "something as inconsequential as TB." The doctor grudgingly admits the private, but kicks him out after three days.

Upon his return to his squad, he is told by the squad leader that there is no place for an invalid.

"Go back to the hospital," he orders. "If they won't take you in, just sit down and refuse to move for as many days as necessary."

Thanks to the government's new "restrictive hospitalization" policy for COVID-19 patients, my mind keeps replaying this image of the wartime field hospital that refused to admit a sick person.

In regions with surging COVID-19 cases, patients with moderate symptoms are required to recuperate at home, as a rule, if their risk of developing severer symptoms is considered low.

Announced abruptly on Aug. 2, the stated reason for this new policy is that hospitals do not have the capacity to keep pace with the dramatic rise in the number of patients.

It was only last week that a Tokyo metropolitan government bureau chief objected to comments that will "fan the public's anxiety."

And Prime Minister Yoshihide Suga also kept preaching unfounded optimism, stressing that the number of patients in serious condition was leveling off.

It appears that the nation's pandemic response is solely in the hands of leaders who refuse to think ahead.

The expression "moderate symptoms" can be misleading. The reality is that many people who fall under this category have been developing respiratory problems or pneumonia.

When these people take a turn for the worse, can they be hospitalized immediately? Are "hokenjo" public health centers that coordinate hospitalization procedures capable of coping with the tremendous burden that's become theirs to bear?

The present situation is truly dire. But it is beyond comprehension that the countermeasures being taken by the government are laxer than when the first state of emergency was declared in April 2020.

Is it that we are now all on our own to protect ourselves? When the policy set by our leaders is totally unreliable, we might as well be living in wartime.