Coronavirus spreading at most serious rate in 23 prefectures 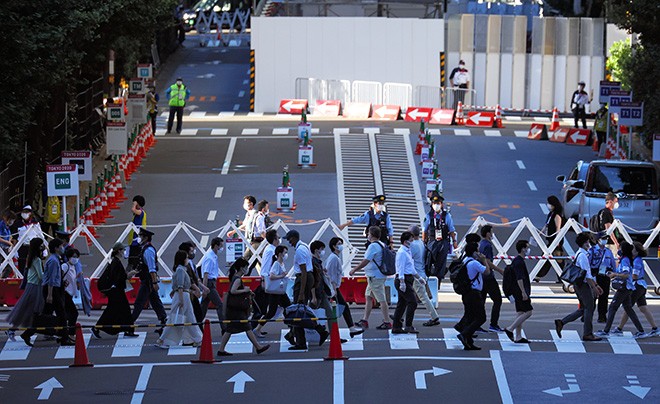 Tokyoites at a crossing on Aug. 4, when new COVID-19 cases hit a record 4,166 in the capital. The main street is closed for an Olympic competition. (Shiro Nishihata)

The novel coronavirus spread has “reached an unprecedented level” in Japan, with around half of the 47 prefectures now in the most serious stage in terms of rate of new infections, a health ministry expert panel said.

Hit by the highly contagious Delta variant, 23 prefectures surpassed that threshold in the most recent week to Aug. 3.

The rates for Tokyo and Okinawa Prefecture, which are both under a state of emergency, were 167.82 and 179.15, respectively.

Other prefectures that are taking pre-emergency measures against the virus are also seeing soaring numbers of new COVID-19 cases.

The panel urged authorities and citizens to share a heightened sense of crisis to combat the virus.

According to the panel, screenings of positive samples found the Delta variant in 13,523 cases in total as of Aug. 2, almost double the number from the previous week.

The National Institute of Infectious Diseases estimates the Delta variant now accounts for about 90 percent of new COVID-19 cases in the Kanto region and about 60 percent in the Kansai region.

In Tokyo and eight other prefectures, the occupancy rate of hospital beds surpassed 50 percent, putting them in the most serious stage 4 for that category.

The virus has also hit the Tokyo Olympics.

Organizers said Aug. 4 that an infection cluster broke out at the Olympic Village, and five of 12 Greek artistic swimmers staying there have tested positive for the virus.

The remaining seven Greek swimmers left the village and are staying at an outside facility as a precaution. Their test results were negative that day.