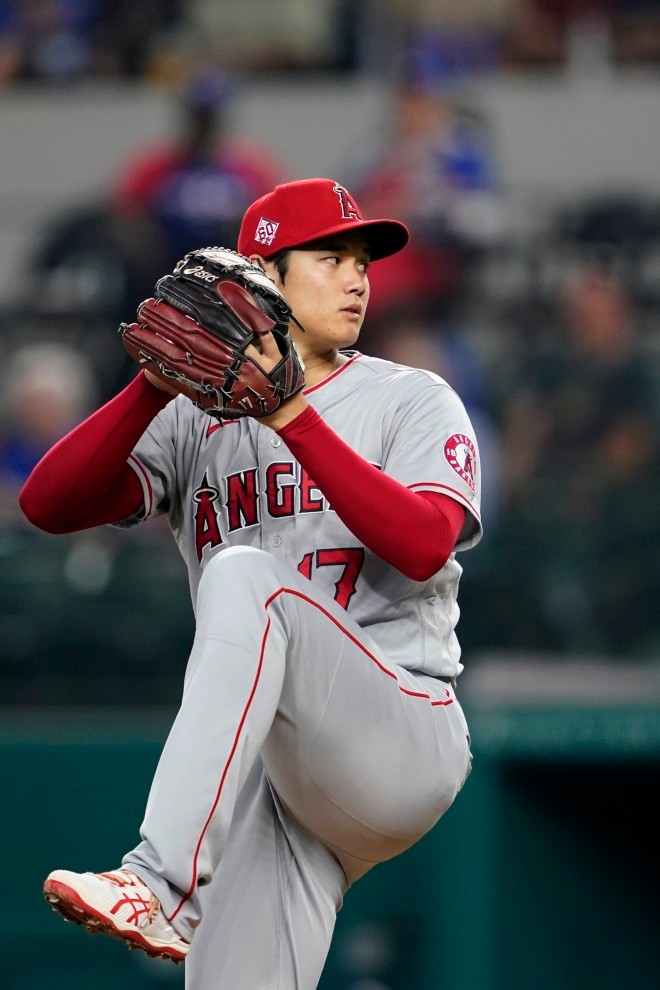 Los Angeles Angels starting pitcher Shohei Ohtani winds up to deliver to the Texas Rangers in the first inning of a baseball game in Arlington, Texas, Aug. 4. (AP Photo)

Mayfield had three hits in the No. 9 spot for the Angels, who improved to 4-25 when scoring two runs or fewer this season.

Ohtani (6-1) allowed four hits while striking out six. He did not walk a batter for the second straight outing and has issued just one walk in his past 26 innings.

Austin Warren and Steve Cishek each tossed a shutout innings for Los Angeles before Raisel Iglesias pitched the ninth for his 23rd save.

Isiah Kiner-Falefa had three hits in the leadoff spot for Texas, which will try to earn a split in the four-game series on Thursday afternoon.

Allard retired the first seven batters before Juan Lagares and Mayfield had back-to-back, one-out singles in the third.

With two outs, a pitch in the dirt got away from catcher Jonah Heim. He was unable to immediately locate the ball, allowing Lagares to score from second on the wild pitch for a 1-0 lead.

In the fifth, Mayfield clubbed a two-out solo homer to left-center field to make it 2-0.

Mayfield, who is expected to get regular playing time at third base after the Angels announced on Wednesday that Anthony Rendon will undergo season-ending hip surgery, has all six of his home runs in the past 17 games.

Kiner-Falefa doubled to lead off the sixth inning against Ohtani. He advanced to third on a Nathaniel Lowe groundout and scored on an Adolis Garcia groundout to cut the deficit to 2-1.

Garcia drew a leadoff walk in the ninth, but Iglesias struck out Heim, then got Andy Ibanez to ground into a game-ending double play.