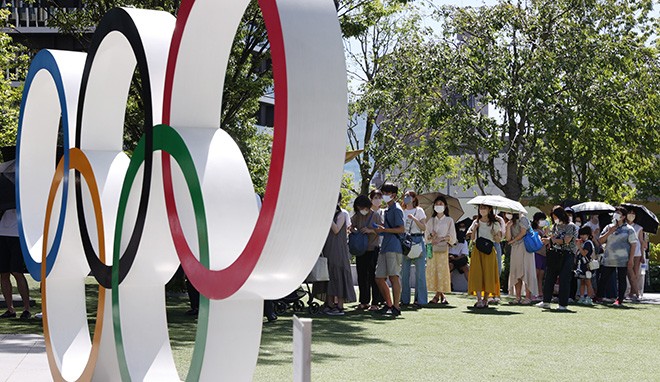 Many people wait in line to take a photo with the Olympic logo near the National Stadium in Tokyo’s Shinjuku Ward on Aug. 5. (Toshiyuki Hayashi)

Kanagawa, Saitama and Okinawa prefectures also each logged the highest number of new infections at 1,846, 1,235 and 648, respectively.

It was the first time the capital’s daily count has topped 5,000, and the tally also broke the previous record for the second straight day.

It also marked the 12th consecutive day for the daily number of new infections in Tokyo to set a new record for each day of the week.

The latest figure brought the daily average of new COVID-19 cases in the capital for the week through Aug. 5 to 3,646.9, or 164 percent of the figure for the preceding week.

The average number of diagnostic tests conducted in Tokyo over the three days through Aug. 4 stood at 15,854.

Officials also confirmed one man in his 60s died from the novel coronavirus in the capital on Aug. 5.

The number of serious cases in Tokyo requiring ventilators or extracorporeal membrane oxygenation, also known as an ECMO lung bypass machine, rose by 20 from the previous day to 135 on Aug. 5.