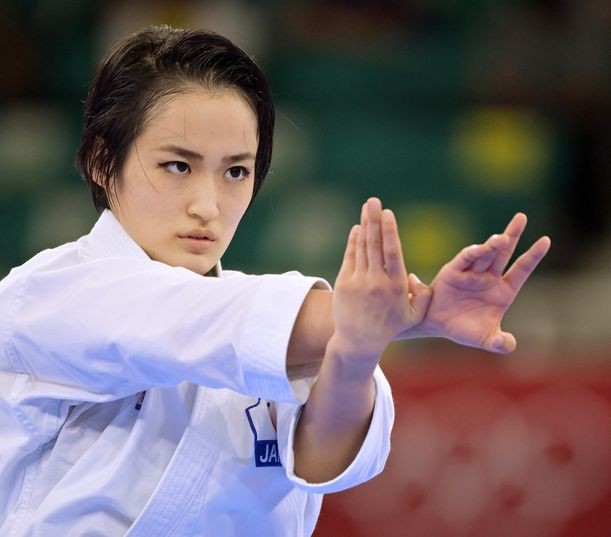 Kiyou Shimizu, of Japan, during the women's solo "kata" competition at the 2020 Summer Olympics on Aug. 5 in Tokyo. (The Asahi Shimbun)

The women's solo "kata" competition kicked off karate's first foray into the Olympics on Thursday, with veteran Sandra Sanchez of Spain taking the maiden gold and leaving her perennial rival and hometown favorite Kiyou Shimizu with a silver.

"There are many emotions right now," Sanchez said of making her debut on the Olympic stage. "I waited a long time for this moment," added the 39-year-old, who was once written off as too old to compete at the highest level.

In the kata discipline, practitioners demonstrate offensive and defensive techniques against a virtual opponent, choosing from 102 forms with esoteric-sounding names like Chatanyara Kushanku and Suparinpei that they yell out before they begin.

The execution of the three-minute kata, which comes from the four main styles of karate--Goju-Ryu, Shito-Ryu, Shotokan-Ryu and Wado-Ryu--is scored based on speed, rhythm, balance, sharpness and other factors.

Performing her routine in a hushed, spectator-less Nippon Budokan arena, the spiritual home of Japanese martial arts in Tokyo, Sanchez scored 28.06 against Shimizu's 27.88.

The pair had scored head-and-shoulders above the rest in the elimination round to face off in the final, as widely expected.

As the two performed, photographers lining the square stage got busier, their camera shutters adding to the sounds of the competitors' snap-cracking dogi and mid-routine shouts.

In kumite, one to three points are rewarded with proper strikes: "yuko," for a punch to the head or body is worth one point; "waza-ari," for kicks to the mid-section is two points; and "ippon," for a kick to the head or any scoring technique delivered to an opponent who has fallen, gets three points.