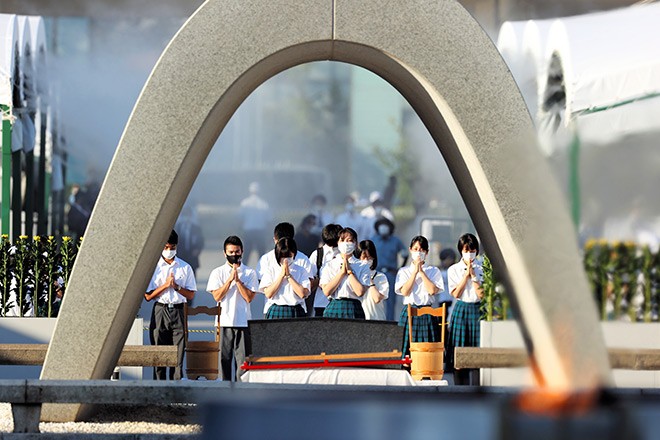 People pray in front of the cenotaph for atomic bomb victims in Hiroshima Peace Memorial Park on Aug. 6. (Yuki Shibata)

HIROSHIMA--At a ceremony on Aug. 6 to remember the atomic bombing of this city 76 years ago, Hiroshima's mayor again urged the central government to ratify a nuclear weapons ban treaty, as atomic bomb survivors have long advocated.

At the annual event, Hiroshima Mayor Kazumi Matsui, touched upon the fact that the Treaty on the Prohibition of Nuclear Weapons (TPNW) went into effect in January in his Hiroshima Peace Declaration.

“In accordance with the will of the hibakusha, I demand the immediate signing and ratification of the TPNW, then constructive participation in the first meeting of states parties,” he said.

Prime Minister Yoshihide Suga, who participated for the first time in the ceremony, said Japan would work as a “bridge” among nations with differing stances to promote nuclear disarmament. However, he did not mention the TPNW.

The first meeting of the parties that have ratified the treaty is scheduled for early 2022.

The ceremony held at the Hiroshima Peace Memorial Park was once again a scaled-down version because of the novel coronavirus pandemic. Similar to last year, only 880 seats, or about 10 percent of past years, were prepared for participants.

A moment of silent prayer was observed at 8:15 a.m. when the atomic bomb detonated above Hiroshima on Aug. 6, 1945, killing tens of thousands of people.

In the Peace Declaration, Matsui also touched upon the visit to the city by Helen Keller in 1948 and quoted her as saying, “Alone we can do so little. Together we can do so much.”

He said further efforts by citizens were needed to work toward nuclear disarmament and to encourage a change in policy.

Matsui also referred to the Hiroshima High Court ruling in July that recognized those on whom the “black rain” fell in the days after the atomic bombing as hibakusha. He urged the central government to also provide relief to black rain survivors who were not among the 84 plaintiffs in the lawsuit.

Suga, in his address, said only that the government would consider measures for those in similar circumstances to the plaintiffs.

The advancing age of the hibakusha and black rain survivors means relief measures have to be implemented as soon as possible. The average age of hibakusha is approaching 84.