Typhoon No. 10 could hit Kanto-Koshin region around Aug. 8 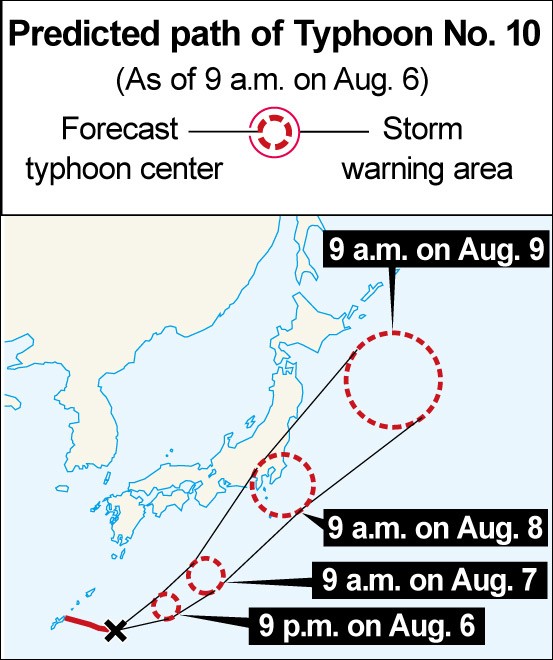 The Japan Meteorological Agency is warning the public of strong winds and high waves as Typhoon No. 10 is expected to approach the Kanto-Koshin region around Aug. 8.

Powerful winds are expected along coastal areas, depending on the typhoon’s path and development.

On the morning of Aug. 6, Typhoon No. 10 was moving eastward in the sea near Minami-Daitojima island.

The typhoon had a central barometric pressure of 990 hectopascals with maximum sustained winds of 72 kph and maximum instantaneous gusts of 108 kph in its center.

Expected rainfall for the 24-hour period through 6 a.m. on Aug. 7 is 100 mm in Okinawa Prefecture.

The typhoon is expected to move northeastward in the south of Japan as it develops and approach eastern Japan on Aug. 7 and 8.

At the same time, Typhoon No. 9 was traveling east-northeast to the west of Taiwan on the morning of Aug. 6. The typhoon's central barometric pressure was 992 hectopascals with maximum sustained winds of 72 kph and maximum instantaneous gusts of 108 kph.