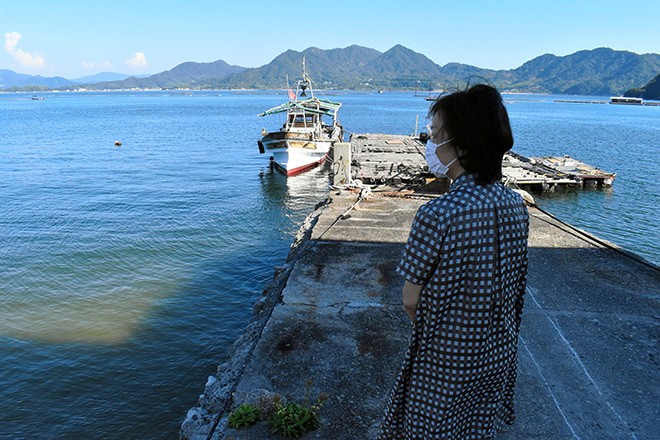 Ritsuko Kuroki looks out at the waters off Ninoshima island in Hiroshima. (Shohei Okada)

A daughter of a hibakusha who never spoke about his experiences but passed them down in writing represented bereaved family members at the ceremony on Aug. 6 to commemorate the 76th anniversary of the dropping of the atomic bomb.

Ritsuko Kuroki, 68, presented a flower wreath in front of the cenotaph for atomic bomb victims at Hiroshima Peace Memorial Park.

The previous day, Kuroki visited Ninoshima island, situated in Hiroshima Bay. She felt she had to see the island for herself because that is where her father, Akira Masuda, survived the atomic bombing.

Masuda died in September 2020 at age 95. In 2007, he handed his daughter a personal account of what he went through before and after the atomic bomb was dropped on Hiroshima on Aug. 6, 1945. Masuda, a native of Tokushima Prefecture, was then studying at what is now Hiroshima University.

While her father never hid the fact that he was a hibakusha, he also never actively spoke about his experiences. Kuroki recalled that her father always seemed to get up late every year on Aug. 6.

On that fateful day in 1945, Masuda found himself trapped in his apartment that had collapsed from the blast of the atomic bomb. Though he was injured, a woman living nearby helped pull him out of the building. In his account, Masuda wrote that he managed to flee to Ninoshima even while covered in blood and dirt.

A makeshift hospital was created on the island and about 10,000 people with injuries were brought there. Many eventually died.

He wrote that he wanted “to cover his ears and shut his eyes” because he didn’t want to see or hear the screaming and crying of those at the hospital.

He recalled that a young girl repeatedly called out her name and school. He realized she had died when he could no longer hear her voice.

Kuroki feels her father wrote the account to express his gratitude to everyone who helped him survive, including the woman who pulled him out of the collapsed apartment, neighbors who encouraged him as they made their way to Ninoshima and those at the hospital who urged him on and told him he would be saved.

Masuda also wrote about his regret at not being able to help the neighbor who saved him rescue her children. He wrote that the woman repeatedly said, “I can hear my children crying and saying, ‘It’s hot, very hot.’”

He recalled how much despair he felt whenever he heard the woman’s repeated regrets.

On Aug. 5, Kuroki stood near the waters where a military pier had once stood on Ninoshima. She wondered if her father also heard the calm waves washing ashore.

“My father’s life was saved here and that is why I can stand here today,” she said.

She added that nuclear weapons should never again be used because “many people died and others continue to suffer terribly even today.”