Tokyo train stabbing suspect hoped to kill ‘as many as possible’ 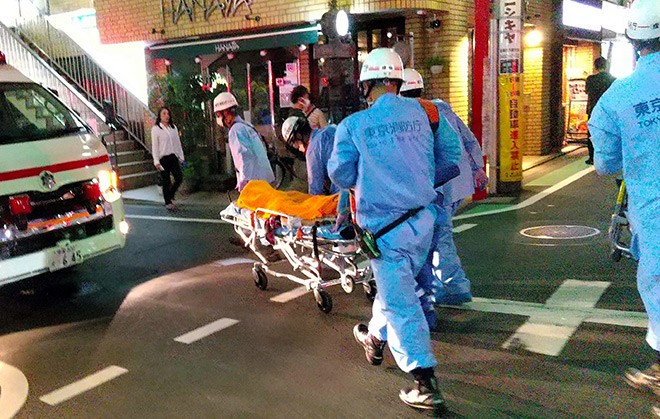 A 36-year-old man arrested for a stabbing spree on a Tokyo commuter train that left 10 passengers injured told police he had hoped to kill as many people as possible.

The suspect, Yusuke Tsushima, also said he had harbored feelings for the past six years or so of wanting to kill anybody he thought looked happy.

Tsushima was arrested on suspicion of attempted murder for stabbing a woman in her 20s in the chest and back. Although in a serious condition, she was expected to survive. Nine other passengers were injured, but none seriously, in the Aug. 6 attack.

Passengers on the train bound for Tokyo's Shinjuku Station said Tsushima started stabbing and punching people on the train from around 8:30 p.m.

He was arrested after police were called to a convenience store in the capital’s Suginami Ward by an employee. Police said Tsushima told the employee that he had committed the crime and was tired of fleeing.

The incident occurred on an Odakyu Electric Railway Co. train that had departed Fujisawa Station in Kanagawa Prefecture and was headed to Shinjuku. The stabbing took place as the train was traveling between Seijogakuen-mae and Soshigaya-Okura stations.

Tsushima moved between three train cars as he stabbed and punched passengers. He also spilled salad oil on the car floor and tried to set it ablaze.

According to investigative sources, Tsushima said he chose a train for his attack because it would be filled with passengers with no way of getting out. Police also believe he carefully planned which train to ride because he took a rapid express train that stopped at fewer stations.

The stabbing incident took place when the train was bypassing a section with the most number of stations that regular services normally stop at.

Tsushima also told police he tried to light the oil in the hope of killing as many people as possible.

When the train came to an emergency stop just before Soshigaya-Okura Station, Tsushima opened the car door and jumped onto the tracks to flee. He left his knife and mobile phone behind.

A 19-year-old university student who was in the front car said other passengers began running to the front car and shouted at the train driver to activate the emergency brake because people had been stabbed.

A 55-year-old company employee said he saw bloodied passengers and those without shoes trying to flee.

Ambulances arrived at Soshigaya-Okura Station to take the injured passengers to hospitals.

A man in his 20s who was in the second car back of where the stabbing began said a male passenger came running into the car and shouted: “A man is swinging around a knife. Run for your lives."

Among the fleeing passengers, the man also saw a bloodied woman staggering and then crouching down to the floor.