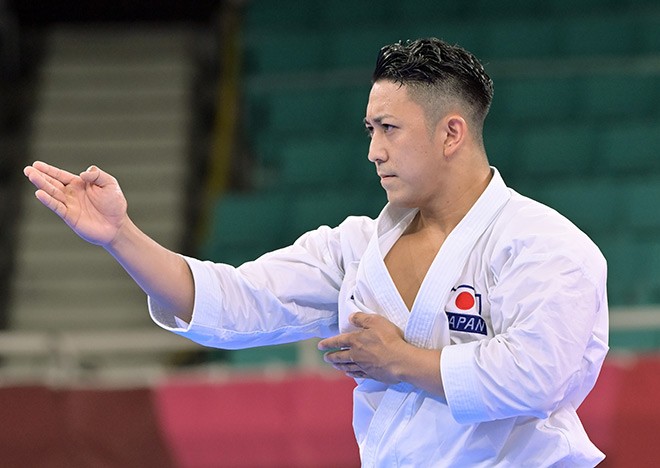 There was much rejoicing in Okinawa Prefecture over Ryo Kiyuna becoming the first Okinawan native to win an Olympic gold medal after the southernmost prefecture returned to Japanese sovereignty in 1972.

The 31-year-old's Aug. 6 achievement in karate’s “kata” event in Tokyo also had special meaning because the sport of karate originated in Okinawa and it is where kata is performed by a wide segment of the local population.

“I feel I have been able to teach the children of Okinawa that they can also achieve their dreams if they do not give up and continue to pursue them,” Kiyuna said after his victory. “I hope they will all hold large goals and have lives that follow their own paths.”

Kiyuna was born in Okinawa city and continued to train in Naha, the prefectural capital, even after he graduated from Okinawa International University.

“He has given us a large amount of moving feelings and courage,” said Yoshitaka Taira, 77, who heads the Okinawa Prefecture Karatedo Federation. “While I believe he was under tremendous pressure, he overcame it by maintaining his calm in his own way.”

Tatsuo Shimada, the current captain of the karate team at Okinawa International University, has idolized Kiyuna for years. In junior high school, Shimada, 21, joined the same karate dojo that Kiyuna belonged to and got a first-hand look at how seriously he took his training.

“He never lets his guard down from start to finish and I was always impressed by the way in which he gave his all every time,” Shimada said.

He watched Kiyuna compete on TV at home and said everything about his performance made him the world’s best.

“In the future, I want to follow in his footsteps and become an athlete who can compete on the world stage,” Shimada said.

Karate is debuting as an Olympic sport in Tokyo. From its roots in Okinawa when it was still known as the Ryukyu Kingdom between 1429 until 1879, karate spread to mainland Japan and later the world by karate masters from Okinawa. Today, about 100 million enthusiasts enjoy the martial art globally.

According to the Okinawa prefectural board of education, in the 2020 school year, karate was part of the school curriculum at 129 of the 143 public junior high schools and 21 of the 50 public senior high schools.

Calls are growing in Okinawa to have karate designated as an intangible cultural heritage by UNESCO.

(This article was written by Keita Mano and Takeshi Tohyama.)