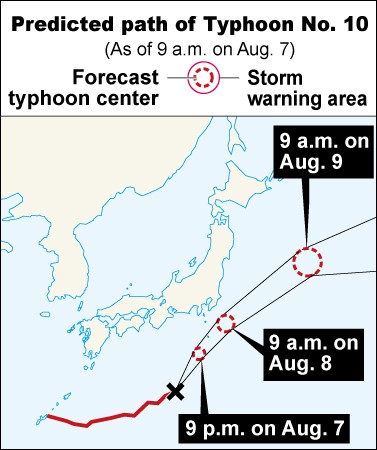 An alert was issued against high waves, landslides and flooding of rivers in Pacific coastal areas of eastern Japan as the 10th typhoon of the season was only hours away from bearing down.

Typhoon No. 10 was forecast to come closest to the Kanto-Koshin region between the evening of Aug. 7 and the morning of Aug. 8, but not expected to make landfall.

On the morning of Aug. 7, the typhoon was moving eastward in waters south of the main Honshu island.

It had a central barometric pressure of 990 hectopascals with maximum sustained winds of 72 kph and maximum instantaneous gusts of 108 kph at its center.

Expected rainfall for the 24-hour period through 6 a.m. on Aug. 8 is 200 mm in the Kanto-Koshin and Tokai regions.

Typhoon No. 9 was moving northward in the East China Sea and approaching the main southern island of Kyushu and Yamaguchi Prefecture in western Japan. The JMA said the typhoon could make landfall sometime between Aug. 8 and Aug. 9.