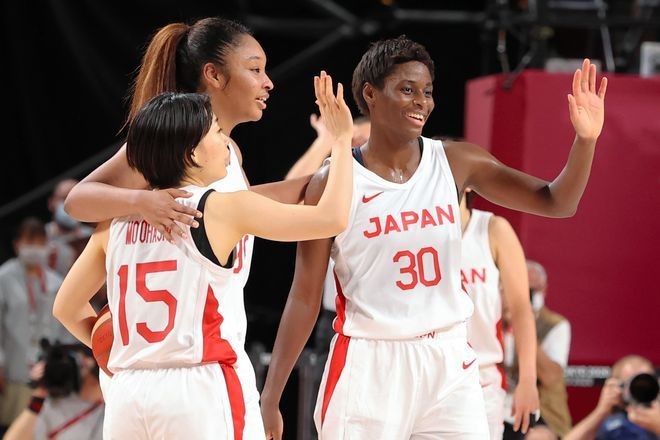 Although Japan’s Olympians are still largely native born and bred, more athletes with overseas roots are helping to lead their teams to glory during the Tokyo Games.

Among them is Evelyn Mawuli, one of the women’s basketball team members who won silver medals after losing to the U.S. squad in the final on Aug. 8.

Mawuli, 26, and her younger sister Stephanie, 22, who represents Japan in three-on-three basketball for the Tokyo Olympics, were born in Japan to parents from Ghana.

They gained Japanese citizenship as children, so they were fully qualified to make it to a national team.

But growing up in a homogenous society was not easy, Mawuli recalled.

When she was young, she had often found herself being left alone because people around her ridiculed for her dark appearance.

Mawuli desperately wished she could look Japanese. But she gradually learned to respond with humor to her bitter experiences.

When she was a first-year student at junior high school, she described her answer to difficult times in an essay themed on human rights: “I tried very hard to contain the anger welling up. I acquired a new technique. That is to accept bad-mouthing from others and turn it into something funny.”

In junior high school, Mawuli often introduced herself humorously, saying, “Please remember me, like Ghana chocolate,” referring to a popular brand of chocolate. Her essay won a prize.

As she drew public attention as a rising basketball player, she became confident in herself.

“I was happy as people called my name and I could be myself,” Mawuli said.

Seeing as Tokyo's slogan for the Games is “Diversity and Inclusion,” Japan’s Olympic delegation includes a number of athletes of mixed-race heritage.

Rui Hachimura is a basketball star who served as one of the flag bearers for Japan. His father is from Benin.

But some of the athletes said they sometimes still find themselves targets of derogatory remarks on social media, even today, and have shared their experiences of being discriminated against in the past.

Mawuli and other athletes with foreign roots are being promoted as an example of Japan championing “diversity and inclusion” for the Games.

But many people still doubt that Japan is anywhere close to fully accepting diversity in its society.

Yoshitaka Lawrence Shimoji, a sociologist at Kyoto's Ritsumeikan University, suggested that the Japanese government and the Tokyo Olympic organizing committee were only paying lip service to the notion of growing diversity with their decision to put mixed-race individuals such as Christel Takigawa as the face of Japan’s efforts to host the Olympics and tennis superstar Naomi Osaka to light the Olympic caldron.

Shimoji said he got that feeling that it was just a “cosmetic” gesture to put on a big show.

As of 2015, at least 840,000 children living in Japan were of foreign or mixed-race ancestry, according to one study.

Many such children continue to suffer bullying and discrimination from their Japanese classmates.

Shimoji blamed flawed assistance programs on the part of the Japanese government for the situation.

“The government should offer full aid to needy children and not simply rely on volunteers and local governments to bridge the gap,” he said.

(This story was compiled from reports by Asami Matsumoto and Yu Kamata.)