Survey: Olympic support up, but Cabinet approval rate drops to 28% 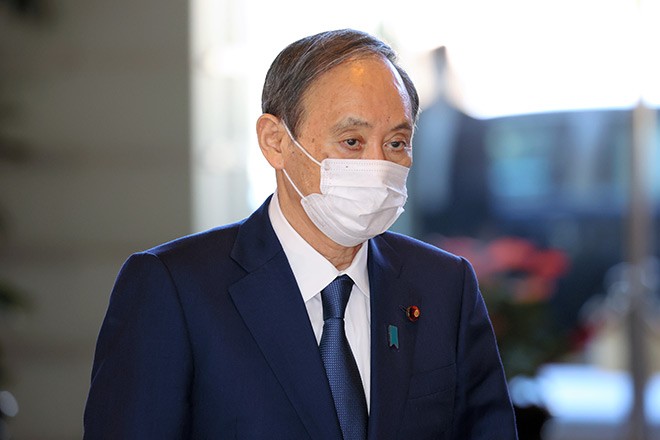 The approval rating for the Suga Cabinet dipped below 30 percent for the first time as two-thirds of voters decried the government’s handling of the COVID-19 pandemic, an Asahi Shimbun survey showed.

The survey, conducted on Aug. 7-8, showed the approval rating had dropped to 28 percent from 31 percent in the previous survey on July 17-18, before the Olympic Opening Ceremony was held on July 23.

The government and Prime Minister Yoshihide Suga’s Liberal Democratic Party held expectations that a successful hosting of the Tokyo Olympics would lead to a rebound in support for his Cabinet ahead of the Lower House election in autumn.

The latest survey showed that 56 percent of voters felt that decision to stage the Summer Olympics was the right one, much higher than the 32 percent who had the opposite assessment.

But the Olympic-related figures did not translate into improved numbers for Suga.

The disapproval rating for his Cabinet increased to 53 percent from 49 percent in the previous survey.

During Shinzo Abe’s second stint as prime minister from 2012 to 2020, the lowest approval rating for his Cabinet was 29 percent recorded in May last year.

After Abe resigned in September last year, Suga took over a country that was preparing for an already-delayed Olympics while fighting the spread of the novel coronavirus.

Suga repeatedly said the Olympics would be held in a “safe and secure” manner when pushing for the event.

With the Olympics now over, only 32 percent of voters said the event was held in a “safe and secure” manner, compared with 54 percent who responded otherwise, the survey showed.

In the July survey, 21 percent said the Olympics would be held in a safe and secure manner, while 68 percent took the opposite view.

Suga’s ratings have again been pummeled by rising numbers of COVID-19 cases and the government’s response to the pandemic.

Only 23 percent of respondents approved of the way the government is dealing with the growing health crisis, matching the lowest ratio set in May in this category.

Among voters who gave failing marks for the government’s anti-virus measures, the disapproval rate of the Cabinet came to 70 percent.

The latest survey also found that 66 percent of voters have no faith in Suga’s approach to the pandemic.

As of Aug. 7, 81.2 percent of people 65 or older were fully vaccinated, according to government data. The comparable figure for those under 65 was 7.5 percent.

Although more than half of voters rated the Tokyo Olympics in a positive light, 61 percent said holding the event during a COVID-19 state of emergency for Tokyo led the public to relax their defenses against the virus.

Thirty-two percent disagreed with that assessment.

In particular, 66 percent of women blamed the Games for the public’s complacency in the fight against the virus, compared with 56 percent of men who held that view.

By age group, the percentage of those who said the Olympics caused public complacency was relatively low among respondents in their 30s.

According to the survey, 60 percent of respondents thought Suga should not be re-elected as president of the LDP when his term in the position expires in late September. Twenty-five percent said he should be re-elected.

Among LDP supporters, 44 percent backed Suga’s remaining in the position, 2 percentage points higher than the ratio of those who wanted him replaced.

Despite Suga’s growing unpopularity, the opposition bloc has failed to improve its position in the eyes of voters.

The LDP gained the support of 32 percent of respondents in the survey. The ruling party was also picked by 35 percent of voters in the proportional representation segment of the Lower House election if it were held now.

These ratios have remained more or less the same since the May survey.

The support rate for the main opposition Constitutional Democratic Party of Japan was 6 percent, while 15 percent of respondents said they would choose the CDP if the Lower House election were held now.

It received 556 valid responses, or 51 percent, from the 1,095 landline numbers of households with at least one eligible voter contacted for the survey.

There were 839 valid responses, or 43 percent, from 1,964 mobile phone numbers of eligible voters that were called. The valid responses totaled 1,395.