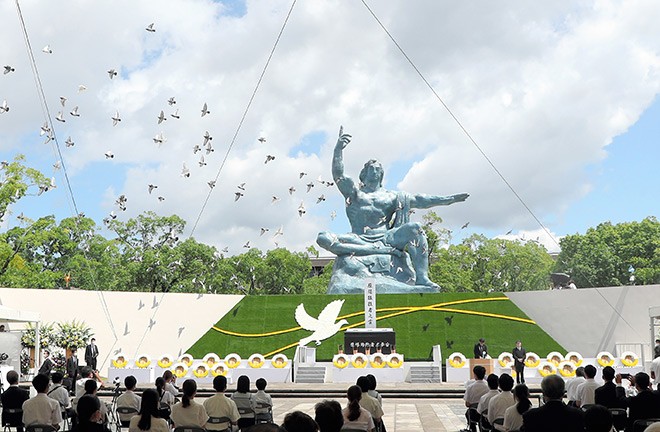 Doves are released during an annual event to mark the 76th anniversary of the atomic bombing of Nagasaki at Nagasaki Peace Park on Aug. 9. (Pool)

NAGASAKI--Nagasaki Mayor Tomihisa Taue pointed to a treaty to ban nuclear weapons that Japan has refused to sign at the memorial ceremony to mark the 76th anniversary of the atomic bombing of the city here on Aug. 9.

In his Nagasaki Peace Declaration, Taue expressed support for the Treaty on the Prohibition of Nuclear Weapons (TPNW), which went into effect in January.

He said the international treaty clearly states for the first time in human history that nuclear weapons are illegal and urged it to become a “universal rule.”

Taue also said that hibakusha survivors are determined to make Nagasaki the site of the final atomic bombing, and it is also a goal of the TPNW. He urged the central government to sign and ratify the treaty.

But Prime Minister Yoshihide Suga, in his speech that followed at Nagasaki Peace Park, did not mention the TPNW.

“We will push our efforts to realize a world without nuclear weapons,” Suga said.

At a news conference later, Suga said, “It is necessary to involve nuclear-weapon states in order to realize a world without nuclear weapons.”

Regarding Japan’s participation as an observer in the first meeting of signatory nations of the TPNW expected next year, Suga said, “I will consider it carefully.”

But he reiterated that he has no intention of signing the TPNW, just as he did during his visit to Hiroshima on Aug. 6 for the annual memorial event in Hiroshima Peace Memorial Park.

After the Hiroshima High Court ruling in July that recognized those whom “black rain” fell on in the days after the atomic bombing as hibakusha, Suga said that the government would consider relief measures for those in similar circumstances to the plaintiffs.

But at the ceremony on Aug. 9, Suga did not mention assistance for those who suffered under the same circumstances in Nagasaki.

At the news conference, Suga said, “A lawsuit is under way, so I want to pay attention to the developments.”

The annual ceremony was downsized due to the novel coronavirus pandemic, as it was last year.