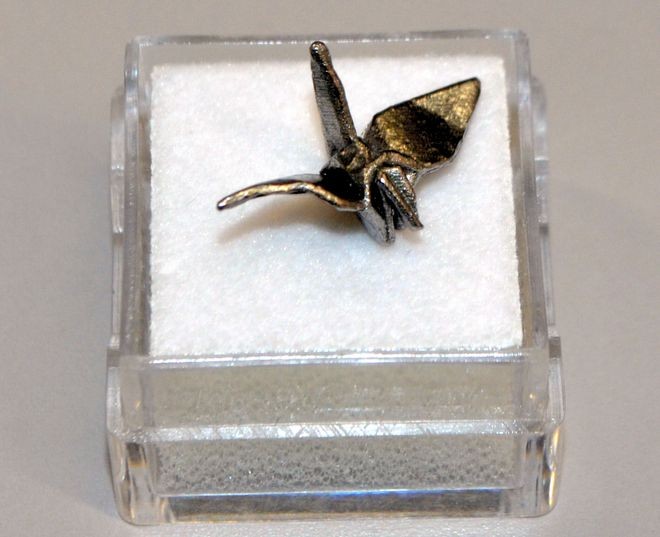 A metal reproduction of a paper crane created by atomic bombing victim Sadako Sasaki is available under the brand name of Sadako. (Hidenori Sato)

“They (the reproduced cranes) will never fall into decay,” Masahiro Sasaki, 80, Sadako’s elder brother, said at a news conference in Hiroshima on Aug. 4, the day the full-sized stainless-steel replica was unveiled. “We will present them to people and groups calling for peace all over the world.”

Sadako was 2 years old when she was exposed to radiation from the Aug. 6, 1945, atomic bombing of Hiroshima. She created origami cranes during her hospital treatment to pray for a recovery before she died of leukemia at age 12.

After her death, origami cranes became an international symbol of peace, and a monument in her honor was set up at the Hiroshima Peace Memorial Park.

“We want to hand down Sadako’s wishes forever,” Toda said.

Masahiro, who lives in Nakagawa, Fukuoka Prefecture, entrusted some cranes to Castem in January this year for the project.

The metallic replica was developed by using a 3-D scanner to analyze a paper crane. The finish product measures 7 millimeters long, 23 mm wide and 13 mm tall. It weighs 1 gram.

Sales started on Aug. 6 under the brand name of Sadako at a Castem’s online shopping site, the Hiroshima Orizuru Tower commercial complex in the city’s Naka Ward and elsewhere for 1,100 yen ($9.98).

Part of the proceeds will reportedly go to organizations engaged in peace activities.