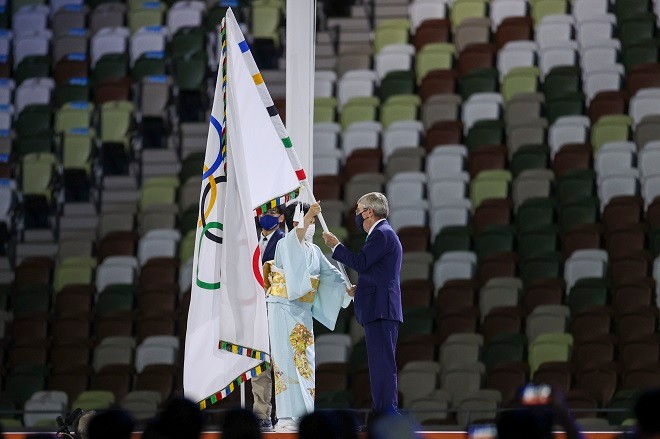 The Tokyo Summer Olympics came to a close on Aug. 8.

The event was staged at a time when the COVID-19 pandemic had still not been contained, jeopardizing people’s lives across the world.

The Games were unprecedented in that many of its events were held without spectators, who would have cheered from their seats, and athletes and other Olympic officials were allowed to mix with citizens only on a limited scale.

We are tempted to ask what this “festival of peace” brought to the attention of our society, what would still be left when the Games were to be stripped of all the many deceptions and the gloss that have been laid bare, and what significance and what future we would be able to find there.

The closing of the event, which was so unusual, should be the starting point of a journey for reflecting on these questions.

CRISIS AT THE END OF ‘GAMBLING’

In an editorial in May, The Asahi Shimbun called on Prime Minister Yoshihide Suga to call off the Olympic Games this summer.

We knew that canceling the Games would be too cruel for the athletes and other officials who had been working so hard in preparing for the event. We also knew the Games themselves could be operated without a major hitch if only scrupulous care were to be exercised.

But we reasoned that the health of the public should not be “gambled on.”

The pandemic has dealt bigger blows to poorer countries. We thought it was simply beyond reason to hold the Games as scheduled, given that fairness and justice, the very foundation of sports, were being compromised.

But the “gamble” was taken, and the pandemic has fallen into an even more dire situation.

A new wave of infection outbreaks occurred, just as had been feared, with hospital beds in short supply, most typically in the greater Tokyo area. The public health care system is on the verge of collapse, as hospitals have been called on to hold back on nonurgent surgeries and routine consultations.

Leading officials including Suga, Tokyo Governor Yuriko Koike and International Olympic Committee President Thomas Bach have never admitted they made the wrong decision in going forward with the Games. They have argued, for example, that no infections spread from participants of the event.

The current crisis, however, cannot be unrelated to the inconsistent attitude of the leaders, who called on citizens to lessen their movements and refrain from operating their businesses while at the same time hosting a gigantic event with people invited from all corners of the globe.

“It is the view of us experts that the Olympic Games did affect people’s awareness,” Shigeru Omi, chairman of the government’s Subcommittee on Novel Coronavirus Disease Control, told the Lower House Committee on Health, Labor and Welfare on Aug. 4. “Political leaders did not issue strong and clear messages with a sense of coherence.”

His statement couldn’t have been more reasonable.

Even before the Games, infection control measures were often contorted by the government’s prioritization of, and preoccupation with, holding the event, such as when the government set periods for declaring a coronavirus state of emergency while taking into account the schedule of Olympic-related events.

When asked about the significance of staging the Games during the pandemic, Suga has only answered the question with vague statements, such as “conveying hope and courage to children” and “sending out the message that the world can be united.”

The public has ceased to listen to the words of the political leader who is unwilling to face up to inconvenient facts, show frank remorse over his errors and work with others to seek the right solution. That has brought the infection control measures to a deadlock.

A succession of mishandlings of COVID-19, which already began under the previous administration of Prime Minister Shinzo Abe, and the way officials forged ahead with the Games, have engraved a deep mistrust and division in our society. Mending that rift is the biggest challenge that politicians should be undertaking now.

The latest event has also kindled skepticism about the Olympic Games in themselves.

The trend for an ever larger Games reached new heights in Tokyo, where a record was set with 339 events held across 33 sports.

The interests of sport organizations, which coveted the status of an Olympic sport to expand their fan and player base, and the desires of the IOC and the host communities, which wanted more value for the Games, worked together to push up the count.

Some sought to review the way Olympic ceremonies were held and take other measures to curb the growth in expenditures due to the postponement of the Games from summer 2020 to summer 2021, only to end in vain. A proposal to reschedule the Games to avoid the scorching heat of summer was also rejected at an early stage.

Many members of the public have learned all this occurred against the backdrop of the intentions of a U.S. TV network, on which the IOC depends for the broadcasting rights fees it pays, and of the major companies that are sponsoring the Games.

The one-sided nature of the host city contract, wherein financial burdens and a variety of other risks are all pushed on the host communities while the IOC remains exempt from losses, and the self-righteousness of IOC officials, who place their own profits and convenience ahead of everything else, have also come to be broadly known both in Japan and elsewhere in the world.

The time will come, sooner or later, when no cities would be making Olympic bids unless that structure and institutional mold were to be put on the chopping block.

The IOC, quick to pick up on the mood, made a pre-emptive move to name the host city for the 2032 Summer Games, but doubts remain about the sustainability of that entire system, and they are only deepening.

The Olympic Charter defines the IOC as an “international nongovernmental not-for-profit organization.” It is high time to reflect, by looking from the bottom up, on whether that provision is still effective.

SILVER LINING BENEATH THE SURFACE

Apart from the wisdom of having held the Games, however, we are sending our heartfelt applause to all the athletes who put up a good fight during the event in embodying Olympism in its primordial sense.

How they challenged their limits, praised their rivals and thanked those around them aroused broad-based sympathy and brought home to people once again that sports have so much potential.

The competitions put up by refugees and members of sexual minorities, who surmounted persecution and discrimination in winning their tickets to the Games, helped make their problems more visible and made people realize how important it is to build a world where the human rights of every individual will be respected.

The maintenance of mental health in athletes also attracted unprecedented attention. To relieve them from excessive pressure, we would have to part with an age-old view of the Olympic Games, which says athletes are there to compete on behalf of their nations.

Urban sports including skateboarding, which was characterized by the spectacular showing of athletes in their teens, were likely thought-provoking from that viewpoint as well.

Facing up sincerely to the problems highlighted by the coercive way the Games were staged could enable a drastic reform of this system called the Olympic Games, which is, unfortunately, plummeting out of control.

That is never an easy path to follow, but making all that happen would warrant being the true legacy of the Tokyo Games.