At 92, Nagasaki atomic bomb survivor vows to share her story 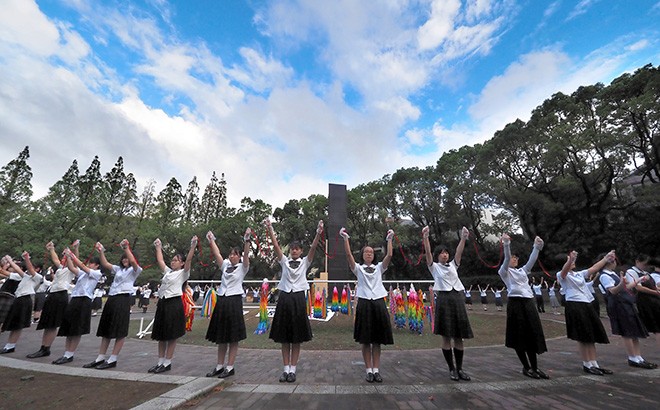 High school students form a human chain around the hypocenter cenotaph in Nagasaki on Aug. 9 to commemorate the 76th anniversary of the atomic bombing of the city. (Shoma Fujiwaki)

NAGASAKI--For decades, atomic bombing survivor Nobuko Oka did not want to share her story--even with her close relatives.

She faced discrimination and became resigned to the notion that nobody would fully understand her experiences, even if she explained them, so she stayed quiet.

She gave a speech calling for peace at a ceremony on Aug. 9 marking the 76th anniversary of the atomic bombing of Nagasaki at the end of World War II, which killed more than 70,000 people.

At 92, she became the oldest survivor to ever read the Commitment to Peace. And it was the first time she attended the annual memorial service.

“We, hibakusha, will speak about our experiences of being witness to the horrors of the atomic bomb as long as we live and vow to continue to call for the abolition of nuclear weapons and peace,” she said, her voice shaking.

When the atomic bomb detonated on Aug. 9, 1945, she was at her home in the city--1.8 kilometers from the blast’s hypocenter.

It was a just few days after Oka, 16 at the time, had returned from Osaka, where she was attending nursing school, as the air raids on Osaka by U.S. bombers intensified.

She has no memory of a blinding flash, nor any sound of the blast.

But she was suddenly blown off her feet.

When she regained consciousness, she was lying beneath the floor of her collapsed home.

Her mother and younger brother pulled her out from the rubble.

She suffered many cuts on her left arm and leg with pieces of shattered glass embedded in her wounds.

But she was soon mobilized to care for the wounded at an emergency aid station set up at nearby Shinkozen school, without receiving any treatment herself.

It was the first time Oka set foot on the medical front, which was packed with heavily injured people.

Without any medicine, she was instructed to remove the maggots crawling over patients’ backs with her hands to stop them from eating into their flesh.

But it was no easy task. They were difficult to remove.

With another student, Oka transported bodies by putting them on a board that had pieces of skin and flesh from the dead still attached to it.

When she saw a dead body, she was so terrified that she tried to run away. But a military medic scolded her for it, and she steeled herself to complete her assignment.

Between her duties, she went into the ravaged city to look for her father, whose whereabouts were unknown after he had gone to a factory.

To her great relief, Oka was reunited with her father at an aid station in the nearby town of Tokitsu about a week later.

But with terrible burns, her father looked completely different. The bone in his left foot was also exposed.

Several days later, they had a horrifying experience taking a packed bus to a hospital in neighboring Saga Prefecture so he could be treated.

Passengers yelled at them.

“You look like a monster,” said one. “Atomic-bombed people should get off this bus,” said another.

All Oka and her father could do was endure the hateful words and remain on the bus.

Although she survived the atomic bombing, radiation poisoning took a toll on her health in the years that followed.

She continued working as a nurse, but she was occasionally struck with severe headaches at work. They were so severe that she would sometime pass out.

Her father died after developing symptoms of what is believed to be atomic bomb disease four years after the explosion.

Oka had to fight not just the pain of radiation poisoning in the postwar years, but also the prejudices against victims of the atomic bombing.

Oka married a man from outside of Nagasaki Prefecture about a decade after the nuclear blast. She did not tell her husband’s relatives that she was an atomic bombing survivor due to the stigma attached to victims.

But when she miscarried the couple’s first child, her mother-in-law blamed it on her being from Nagasaki.

She would not share her accounts about living through the explosion and the hellish aftermath even with her husband, who died about 15 or so years ago, or her two children, who live separately from her.

“I did not want to even recall what I went through,” she said. “It is impossible for others to understand, even if I speak about it.”

But in the past few years, she began to change her mind.

In 2019, she described her experiences on two occasions before students at a university that succeeded her old school at the request of university officials.

In the following year, she put her account of the event on the record for future generations at a national facility commemorating the war.

Then came an epoch-making development in January: the Treaty on the Prohibition of Nuclear Weapons outlawing nuclear arms as inhumane went into effect.

Oka felt rewarded. She believes people in the world strongly called for the treaty after listening to what atomic bomb survivors had to say, even if their voices as individuals were small. Younger generations took over the task of advancing efforts to eliminate nuclear weapons from the world.

Oka became convinced that going public with her story would be meaningful because it may encourage other survivors to come forward and share theirs.

“There are things I still need to do,” she said. “I should reach out to people who have little knowledge of the atomic bombing as well as young people.”