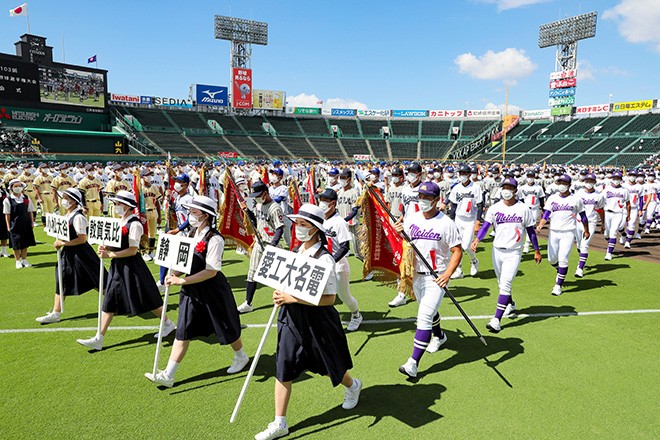 NISHINOMIYA, Hyogo Prefecture—Spectator limits, scaled-down cheering sections and other anti-virus measures could not dampen the spirit of students as the National High School Baseball Championship opened on Aug. 10 for the first time in two years.

The summer tournament, one of the most widely watched sporting events in Japan, was canceled last year because of the COVID-19 pandemic.

There were 3,603 teams that entered the regional qualifiers, but only 49 of them will play in the 103rd tournament at Hanshin Koshien Stadium in Nishinomiya, Hyogo Prefecture.

Part of the Aug. 10 opening ceremony was simplified to prevent infections. Players wore face masks and did not parade around the field perimeter as they usually do.

When the players lined up in the outfield, they stayed about 1.5 meters apart from members of other teams.

At the beginning of the ceremony, Ikusaburo Yamazaki, 35, an actor and singer, sang the anthem of the championship, “Eikan wa Kimi ni Kagayaku” (The crown of victory shines on you).

Female students of the municipal Nishinomiya High School held up placards to lead each team entering the stadium.

The size of the brass band and chorus group was reduced to less than half the usual size.

Nio Kinoshita, captain of the Komatsu Otani High School baseball team, gave a pledge on behalf of the players.

The team, representing Ishikawa Prefecture, is appearing in the tournament for the first time in 36 years.

“This is the first summer Koshien tournament in two years,” said Kinoshita, a third-year student. “We will play with all our might to help people remember how wonderful it is to pursue dreams. We pledge to show what high school baseball players can do at this stadium that we have dreamed about.”

Until now, there were two days of rest during the championship, but an additional day with no games has been set from this tournament.

The opening ceremony and three games scheduled for Aug. 9 were pushed back by one day because of Typhoon No. 9.

Attendance is limited to people related to schools participating in the tournament, such as students and their parents. A maximum of 50 members of a brass band club per school can cheer on their teams in the “Alps” section of the stands.

Tickets are not available to the general public.