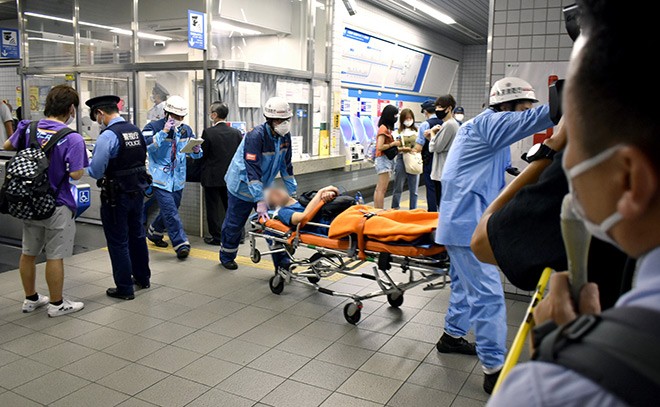 A suspect in a stabbing spree on a Tokyo commuter train on Aug. 6 is believed to have purchased a flammable liquid and lighters to also start a fire aboard, according to investigative sources.

Yusuke Tsushima, 36, of Kawasaki city, is accused of injuring 10 passengers on an Odakyu Electric Railway Co. train in Tokyo. He was arrested on suspicion of attempted murder.

Police believe that the suspect poured a bottle of cooking oil he purchased at a supermarket near his home just before the attack occurred, according to investigative sources.

The suspect is believed to have attacked passengers one after another and tried to set the oil ablaze with a lighter.

Tsushima told investigators, “I could not prepare kerosene and so used (cooking oil) instead.”

According to the police investigation, he bought the cooking oil and two lighters at a supermarket near Yomiuri Land Station on the Odakyu Line, close to his home, just before he got on the train. His shopping activities were caught on security cameras.

Tsushima could have been in financial difficulties, according to investigative sources.

He started to receive welfare benefits a few months ago, and he received a payment for his living expenses a few days before the attack occurred.

On the same day as the stabbing spree on the train, Tsushima shoplifted some food at a commercial facility in Tokyo and was questioned by police. He later complained about being questioned as well.

The police are investigating how the shoplifting incident was related to the mass stabbings.

Tsushima told police that, “I had fantasized about killing a lot of people,” and “I chose a train because I can kill numerous people, who I can catch by surprise and have nowhere to escape.”

He also said that he thought about targeting the bustling scramble crossing in Tokyo's Shibuya district and that, “I thought that I would cause much destruction there because there are so many happy people at the spot,” according to investigative sources.

Investigators said that security cameras on the train recorded the attack.

According to Odakyu Electric Railway, four security cameras are installed on each train car. The video footage shows that the suspect suddenly stabbed a seated woman in her chest with a knife and repeatedly slashed her back as she tried to escape, according to investigative sources.

Later, as he moved across train cars, he attacked a string of passengers in a span of a few minutes. He then got off the train and apparently ran away.

The suspect is accused of attempted murder by stabbing the female college student in her 20s in the chest and back with a 20-centimeter knife. The woman was severely injured.

The attack occurred in a 10-car rapid express train running between Seijogakuenmae and Soshigaya-Okura stations in Tokyo’s Setagaya Ward around 8:30 p.m. on Aug. 6.