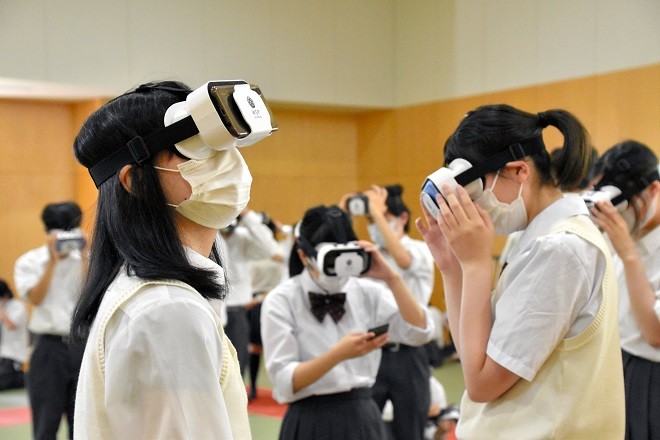 Students at Sarugaku Elementary School in Tokyo's Shibuya Ward got the bad news that many others in Japan have heard over the past year during the novel coronavirus pandemic.

The school's fifth- and sixth-graders were disappointed when they were told their overnight excursions scheduled during their summer vacation were postponed.

The decision was announced on July 9, a day after it was decided to issue the fourth COVID-19 state of emergency for Tokyo.

With school trips put on hold due to the pandemic, school officials are struggling to provide students like the ones at Sarugaku Elementary School with an opportunity to gain valuable experiences and make memories while protecting their health.

While students are discouraged by the postponements of their overnight excursions, travel agencies are offering virtual reality experiences as an alternative.

According to Principal Toshiaki Miyata at the ward-run Sarugaku Elementary School, the students seemed to have been prepared for the cancellation because it had been decided either to postpone or to cancel the plans should a state of emergency be declared.

The sixth-graders also had their overnight excursion canceled last year because of the pandemic.

"We want to plan an event for them to make fond final memories of their elementary school days, even if it means a day trip," the principal said.

According to the ward's education board, all 18 ward-run elementary schools decided to delay their overnight excursions planned during the summer vacation, citing the state of emergency.

None of the students at the eight ward-run junior high schools have yet to make a school trip in the academic year that started in April.

"With some schools postponing their athletic meets to autumn due to the coronavirus pandemic, we don't know whether all the schools can conduct overnight excursions in or after autumn," an official said.

Osaka Mayor Ichiro Matsui announced during a news conference on July 30 that four city-run junior high schools will go on school trips as initially planned even during the state of emergency.

"The Olympics are being held. I want to implement events that will be remembered for the rest of their lives," he said.

Students can join the trips after they test negative on a polymerase chain reaction (PCR) test.

The students at the four schools will visit Nagano or Gifu prefectures in late August, the mayor added.

But when Matsui was asked by reporters on Aug. 2 about a voluntary ban on school trips, he said, "If the central government sets it as a major policy objective, we will have little choice but to comply."

In Kagawa Prefecture, officials of the Prefectural Takamatsu Sakurai Senior High School in Takamatsu postponed a school trip for second-year students to visit Hokkaido in late June, although the state of emergency or pre-emergency measures are not imposed in the prefecture.

They were to decide in May whether it was possible to greenlight the trip, but the state of emergency was in place for the nation's northernmost prefecture at the time.

The officials must determine whether the trip can proceed in or after autumn about two months prior because of cancellation fees.

"This generation has seen many events canceled. We hope they can make some lasting memories somehow," Vice President Yukihiro Kasai said.

Meanwhile, virtual school trips have attracted attention as an alternative to enjoy sightseeing and learn about trip destinations from classrooms.

On June 17, about 160 third-year students of Tokyo Metropolitan Oedo Senior High School wore a virtual reality headset to go out on an "underwater" stroll on the seabed off Okinawa Prefecture.

Displayed by the headset were interactive digital images jointly created by World Scan Project Co., a company dedicated to drone research and development, and Kyushu University from 3-D scan data of a sunken U.S. warship.

The students were seen looking up and down and stretching their arms.

The students were initially scheduled to visit the southernmost prefecture in June this year, but their travel was canceled in May due to the pandemic. Instead, the school turned to the VR trip, as part of which they also enjoyed the hands-on experience of controlling a drone.

"It was fun to experience VR. I never imagined I could see the bottom of the sea," said Tomoaki Nakao, 17.

As of late June this year, 9,170 students from 77 schools utilized the service. Of these, 80 percent were from schools in the Tokyo metropolitan area.

The company said it will start a VR program featuring Nikko in Tochigi Prefecture from September.

However, it is undeniable that VR travels are less than satisfactory in comparison to the real thing.

"It feels unrealistic," one social media user said, while another added: "When our once-in-a-lifetime school trip is conducted online, why is the Olympics happening?"

(This article was compiled from reports by Azusa Mishima, Tomomi Abe, Aya Shioiri and Yukihito Takahama.)